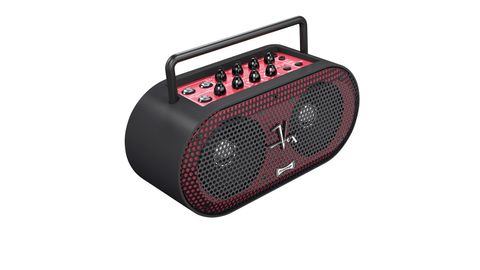 The broad range of tones and effects, as well as the impressive 3D effects of Acoustage, make the Soundbox Mini a serious contender for your desktop amp.

In recent years, practice amps have undergone something of a revolution; Yamaha was first to shake things up with the living room-friendly Yamaha THR range, and more recently, Blackstar offered its own take with the ID:Core series. Now, Vox has unveiled the Soundbox Mini, a stereo amp with plenty of sonic options.

Where the Soundbox differs from its rivals is in its portability - not only is it compact, but it can be powered with batteries, which makes it equally at home as a music player on the move, thanks to an auxiliary input for your phone or mp3 player.

You get inputs for guitar and mic, as well as a raft of effects, plus guitar, bass and keyboard presets - not to mention Korg's Acoustage technology, which makes it seem as if the sound is coming from all around the amp, rather than the two four-inch speakers.

Each of the four guitar presets - tweedy clean, AC30 crunch, British high-gain and metal scoop - offers a decent approximation of classic sounds, augmented by the sweet-sounding effects, although the reverbs add more hiss than we'd like.

But while the tones are pretty juicy through headphones, the output from the Soundbox is a little, well, boxy, and not the fullest sound we've heard from speakers of this size, either as a guitar amp or portable stereo.