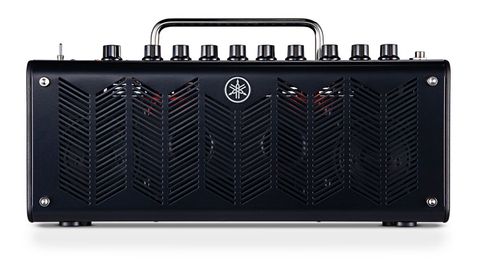 The THR hits the spot for vintage tones for home use and recording - check it out now.

Yamaha's THR 'third amp' concept assumes we all have our big stage stacks and a club-sized combo, and while this may seem a little unrealistic, there's no doubt that the original THR amps put the desktop practice/recording amp concept firmly on the map.

About the same size and shape of a loaf of sliced bread, the originals were finished in a nondescript satin 'computer beige' colour. The new model seems pepped up with a dark satin blue. The screen-printed lettering around the controls could do with being a little bolder, but overall the new finish looks smart.

Beneath the steel fascia there's an injection-moulded plastic chassis that also forms the amp's ported stereo loudspeaker enclosure, while the circuit board is mounted to the top surface. The THRs are all DC-powered with a supplied mains adaptor or eight AA cells. The snap-on plastic battery cover looks reasonably robust, though we'd prefer to see it secured by a screw for long-term reliability.

Power indication comes from the active amp model LED on the control surface as well as two more orange LEDs behind the steel louvre speaker grille, providing the retro glow effect that Yamaha calls Virtual Tube Illumination. The circuit is on one neatly finished PCB full of miniature surface-mount components, many of which appear to be custom-made.

There's a single standard jack input for guitar, a separate aux input mini jack for mp3 players or other audio sources, and a headphone output jack. On the rear surface, there's the DC power input and a USB socket. You'll also find an eight-position amp model selector, which feeds gain and channel volume controls as well as the standard bass, mid and treble tone network.

The next two knobs govern the THR's built-in effects, with one control for modulation sounds and the other for delay and reverb. In common with many other modelling amps, both effects knobs are divided into four sectors, progressively varying the mix level of your chosen effect before moving on to the next one. Turning either knob fully anti-clockwise bypasses the effect.

The positions of these eight knobs can be stored and recalled into one of five presets, accessed by a series of small pushbuttons. Another small button operates the delay's tap tempo function and the THR's built-in tuner.

A small circular LED display shows the active preset number and also provides tuning and tap tempo rate information. On the right of the control surface, two more non-programmable knobs set the overall output level for the amp and whatever's plugged into the aux input.

With the amp connected via its USB port, and the THR editor installed, you can access the amps' hidden functions, including a noise gate and a superb compressor.

You can also swap reverbs from the default spring/hall types the THR comes with, toggle the extended stereo-imaging circuit, fully control the modulation effects and have millisecond-accurate control of the delays. You can even turn off those VTI LEDs. Crucially, you can store and save up to 100 user patches, which can be sent and recalled from the THR.

The Steinberg USB driver streams audio into or out of your choice of recording and playback software, including Cubase AI, bundled with the amp. There's also a THR app for iPhones called Session, which lets you notch out the guitar from pre-recorded music, speed it up or down and vary pitch by up to a semitone in either direction so you can play along with all your favourite tracks. One thing you can't do is port amp sounds or effects from one THR to another.

The THR's sounds are created using Yamaha's proprietary Virtual Circuit Modelling process, a technology central to the company's high-end digital mixing consoles. For speakers, Yamaha turned to its own hi-fi division to create the drivers and enclosures, designed to enhance the amp's Extended Stereo Imaging feature and overall tonality.

In short, a lot of serious tech has been leveraged by Yamaha to make the THRs sound good - and the amp sounds huge at low to medium volume, with a natural response that makes it very easy to play.

The extended stereo imaging effect works best at close quarters. At first, it's a little disorienting because the sound appears to be coming from invisible sources about six feet either side of your head. Once you get used to it, though, it's very impressive, especially when you realise everything comes from two speakers not much bigger than headphones.

The THR10C is all about boutique and vintage vibe, with the emphasis on great clean and mildly distorted real amp sounds rather than huge overdrive capability. There are five THR10C-unique models plus three that are common to the range: Bass, Aco and Flat.

The THR10C's sonic palette includes Mini (a low-wattage boutique tone with a lot of overdrive), along with some excellent sounds based on classic American and British boutique and vintage designs.

The sounds are truly excellent and wouldn't be out of place on any pro recording. The effects are similarly superb, with a cool tape echo simulation on the C replacing a regular delay. The addition of some juicier modulation effects, perhaps a Leslie and a Uni-Vibe instead of the chorus and phaser, would make it even better.

Above all, and despite the considerable technology involved, the amp is good fun to use and creates some serious recorded tones - the USB interface makes it a snap to put down some rewarding and very usable sounds.

While there are many small modelling amps around today, few of them look or sound as good as the THR, and none in this size offer stereo. But one thing that nearly everyone we showed it to commented on was the lack of a proper line out for connection to PA or mixing desk. Of course, in the context of the THR's 'third amp' concept, there's no need for one.

That said, if a stereo balanced line out was added, there's no doubt that they'd become ideal live performance partners for many musicians - the headphone output goes some way to providing this, though it's a little too noisy for professional use. But for home practice and recording, the quality of sound is truly outstanding, as is, we'd wager, the sales potential!