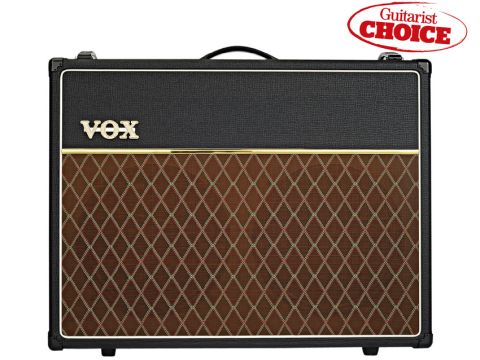 If you've been put off by previous AC30s, this, finally, is the one to opt for and enjoy.

The Vox AC30: a bastion of British tone that defined a generation in sound. Since the UK-made reissues of the 1990s, the brand has been continually evolving its solution to affordable-yet-authentic new versions of its number one son.

A significant watershed came in 2005 when Vox switched production to China for the well-received Custom Classic series. Player feedback, however, told Vox's designers that the CC's myriad switches and options were largely surplus to requirements, so what better reason to revisit the design, save a bit of cash and offer an all-new, more stripped-down AC30 Custom? Intrigued? Yep, us too…

Before you read on, check it out in action on video:

The very first AC30s didn't have the fabled Top Boost section; it was originally something you could have as an upgrade if you returned your amp to the JMI factory in Kent. Later models had it as standard of course, and it's no surprise to see it included here alongside a 'normal' channel.

The two channels aren't footswitchable, though each has its own inputs and volume control, feeding the master volume - unlike original AC30s - and Tone Cut pots. The Top Boost channel also has a pair of tone controls while the onboard reverb and tremolo sections, both controlled by two further pairs of controls, are applicable to both channels. It's also possible to plug instruments into both channels at once.

The livery here is evocative of the old-school as always, with the chicken-head knobs and purple top panel working perfectly with gold piping and brown diamond grille cloth. One of the most important features for tonehounds and collectors when considering a vintage AC30 is the provision of Celestion Alnico Blue speakers. Our review model has the more affordable 25W Celestion G12M Greenbacks, though there is also a Blue-loaded version (the AC302X at £1292).

The rear panel offers a mono effects loop, with the additional feature of a bypass switch to enable you to remove it from the signal chain entirely, and there's also a choice of speaker outputs: the extension jack allows you to link a second cab in the traditional manner, plus the socket marked External outputs the sound while also muting the internal Celestions.

The optional two-way VFS2 footswitch turns the reverb and tremolo on and off - it seems a bit stingy to have to shell out another £32 for the privilege. Weighing in just over 32kg, it's a fairly hefty amp, as you'd expect but any portability issues are done away with thanks to the three strong plastic handles that enable you alone, or with help from a bandmate, to move it.

Internally, the Custom is built around a modern PCB design like the majority of new amps from the big brands. One significant change from 'proper' AC30 spec is that the Custom has a solid-state rectifier instead of a GZ34 valve.

Traditionally, the classic-spec Top Boost AC30 offers chiming clean tones with a brilliant-bordering- on-gritty edge, all of which gets darker and more overdriven as you wind it up. Much of that is in evidence in the Top Boost channel here, but thanks to the master volume setup, it's much easier to coax the AC30C2 into overdrive at lower levels.

The Normal channel has less scope for adjustment and is cleaner sounding - we achieved good results jumping the channels with a patch lead and mixing the two. Overall, this amp feels more overdriven than one of the older UK-made reissues, and as a result, slightly less visceral too which is no bad thing.

Few players have the luxury of cranking a non-master volume AC30 to its full potential; the new amp is still plenty loud enough for gigging, but gives you the flexibility to set up tones from '60s-inspired cleans through to a convincing classic rock overdrive at any output level.Don't expect super-clean cleans when the master is cranked, however: this amp loves to drive.

Whether it's a brash Fender Tele ably mimicking Lennon's trademark Ricky twang or a soupy Epiphone Casino that adds cream to the mix, this AC30 Custom is certainly versatile - it even does a good Brian May at - gasp! - a manageable volume!

The reverb can span subtle and warm or deep and brash - as you like it - while the tremolo throbs deep and beautiful for atmospheric musings.

This amp mixes versatile tonal performance with modern build standards at a very attractive price point. Die-hard Vox fans will bemoan the master volumes and absence of a valve rectifier, but Vox's Heritage Collection is there for those folks. This new Custom is more about achieving classic Vox flavour but with a nod to modern usability.

The AC30C2 offers plenty of headroom for bigger gigs, covers some classic AC30 ground, but with a hotter, slightly more contemporary feel to the overdrive, giving it wider appeal than a vintage-correct reissue. At a shade over £800 we'd say that's excellent value for a quality, all-valve 2 x 12 combo.

You might think that Vox is a bit old-school for you, but we'd urge you to give it a try and see just what 50+ years of heritage could do for your sound and playing.