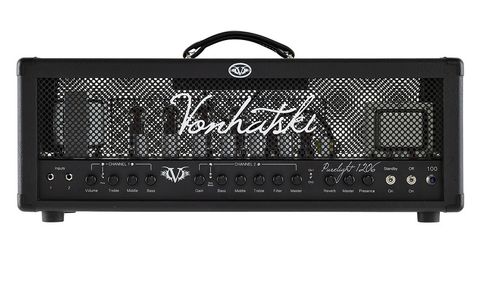 Superbly built with a wide range of classic to metal tones and oodles of volume: add Vonhatski to your must-try list.

In this era of austerity, it's a rare and auspicious occasion to be able to announce the arrival of a new British guitar amp brand. Though the name may suggest otherwise, Vonhatski Amplification is as British as can be, hailing from Rotherham in South Yorkshire, where the products are not only designed but also constructed.

The brainchild of founder and MD Stefan Suchacki, Vonhatski has been running in pre-launch mode for several months, building up a burgeoning social media presence and artist roster. Now it's time to see some real live products, and here we're looking at the first Vonhatski design to come to market: the Purelight 1206, in 100-watt head.

The Purelight head is neatly constructed from plywood, covered with a decent quality black vinyl, and accented with white piping, enamelled badges and white plastic script logos. The amp has a heavy duty steel chassis with welded corners and a black powder coating that also serves as the background for the white screen-printed lettering on the front and rear control panels.

Massive Demeter mains and output transformers sit at either end of the chassis, while inside there's an equally large choke - another wound component used to filter AC current.

"Those transformers are hand-wound to my specification and are key components to the Purelight's sound and response," Suchacki explains.

Another much smaller transformer sat on top of the chassis couples the Purelight's valve reverb circuit to a short spring tank. With the exception of front and rear panel switchgear, the electronics are PCB-mounted, with one large through-plated circuit board supporting everything including the porcelain valve bases and front panel knobs, and a smaller PCB strip for the rear panel sockets.

This one-board layout simplifies construction but can complicate servicing, because there's no quick way to remove it if, for example, a relay should fail. The Purelight's heater filament circuit is AC-powered with a twisted pair of wires leapfrogging from each of the preamp valve's heater terminals to reduce noise.

Wire connections off the PCB are made with decent quality spade connectors, and what little wiring there is has been neatly routed. Overall, the electronics are definitely a cut above average, and the soldering is clean and bright.

The Purelight is a proper dual rectifier design, with a choice of either silicon diodes or two GZ34 rectifier valves. Despite the PCB construction, the Purelight's relatively simple design is old-school, with relays for channel switching, a transformer-coupled valve-driven spring reverb, and a valve-buffered effects loop. In valve rectifier mode, the Vonhatski offers a pure all-valve signal path.

There are two separate preamp channels, with conventional volume, bass, mid and treble controls. The Purelight's overdrive channel also features a gain control and an extra EQ knob called Filter, which sweeps a soft notch across the bandwidth, accenting high mids at one extreme or low mids at the other, enabling the amps to sound more American or British depending on the setting.

This channel also features a footswitchable boost, while the clean channel has a Pure switch that adds extra shimmer to high frequencies. Near the mains and standby switches are three master controls for volume, presence and reverb.

On the rear panel there are switches for rectifier selection, full and half power, plenty of fixed impedance speaker outlets and a pair of insert jacks with a mix control for the valve-powered effects loop.

In addition to this, there's a fixed-level line out jack and two footswitch sockets - one for switching channels and reverb, the other for toggling the overdrive boost and effects loop.

The overall impression is one of simplicity combined with tank-like build quality. Our only real niggle concerns the control knobs, which have a small dimple position indicator that's hard to see in normal light.

The Purelight's clean channel is based on the classic USA 'blackface' reverb amplifier, and certainly evokes that vibe, with a deep, rounded bass response, restrained midrange, and bright treble that has just enough snap to cut without sounding harsh or shrill.

The Pure switch is a subtle version of a regular bright function, emphasising highs when they might otherwise be a little lacking. This is useful for mid-biased guitars - one of our regular test instruments is a superb '72 Les Paul Custom and the characteristic warm bark of this instrument often benefits from a little extra snap.

We felt that single coils or brighter PAF-style humbuckers sounded best through this channel, while the opposite turned out to be true for the Purelight's mega-gain overdrive channel. This channel features a notch filter control that emulates the guttural midrange grunt associated with some 1980s Brit amps at one extreme, or the glassy bite of a certain American high-gain head at the other.

There's plenty of gain here to handle any guitar - almost too much, for some instruments. With a regular low-output Strat plugged in, all the most usable sounds happen in the first third of the gain control's travel. Higher gain settings are less distinct and easier to lose in a mix. However, switching to the Les Paul added a warm midrange punch that put the Purelight back on track, with a sweet singing sustain that's perfect for classic rock and early metal stuff.

The amp is very loud, but in a good way, with headroom to spare thanks to those massive transformers. The reverb is a little overpowering, but has since been toned down for production models, while the switchable effects loop works smoothly and sounds great with a delay and chorus stompbox as well as an industry standard multi-effects floorboard.

The Purelight 1206 is a straightforward, proper all-valve amp that could tick the right boxes for many guitar players. It's a heavy product built for life on the road, so may not be the first choice for weekend warriors where portability is a prime consideration.

However, for serious amateurs, semi-pros and professional players who want an affordable proper all-valve circuit with dual-rectifier flexibility, the Purelight 1206 merits a much closer look.

"Like many amp builders, I started off making my own designs to get a particular blend of sounds, features and reliability that existing products didn't offer," says Suchacki.

"The Purelight 1206 is the only British dual rectifier amplifier on the market, and it was important to me from the start that the amp was not only designed, but also made in the UK. We're excited to be bringing something new to the table, with affordable boutique- level tone and British build quality."

It's always a pleasure to see a new brand make its debut, especially when that brand is British-designed and built, and we wish Vonhatski all the best.