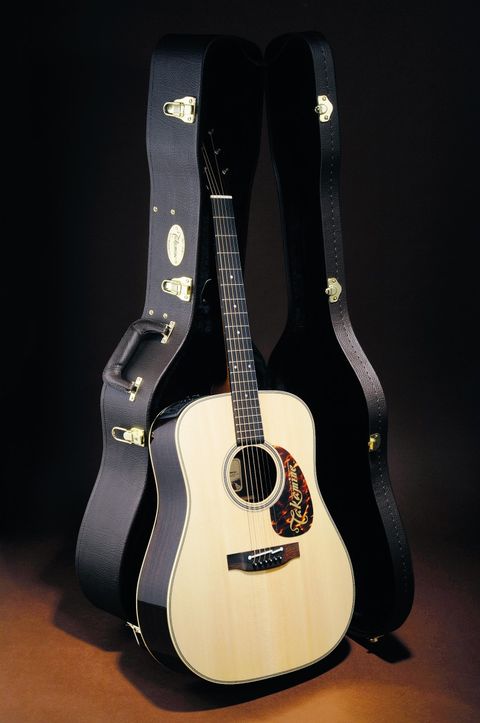 This is a top all-rounder that anyone should be happy to grow old with.

For many players, the 'best' format for a traditional dreadnought is defined by Martin's pre-war models, with them having won friends in every genre, especially country and bluegrass flatpicking.

Takamine has some presence in those areas, but the company's guitars are still considered 'too modern' by many.

Solid rosewood back and sides is a good start and, while the timber isn't named as region specific, the dark, even stripes and obvious quality inspire confidence. The high-gloss finish is lovely and thin - much better that than a thick, gloopy coat.

The bookmatched solid spruce top is tightly grained at the join, getting less so towards bass and treble sides, in theory meaning maximum strength at the bridge, but enabling the top to resonate more freely from the edges.

Underneath is a beautifully finished, scalloped X-brace arrangement - another essential element in the ultimate dreadnought spec sheet.

Finished with off-white ivoroid binding, lovely herringbone purfling and a faux tortoiseshell pickguard, it exudes understated elegance and A1 build quality inside and out.

At the peghead, Takamine's familiar script logo is simplified to a lone 'T' inlaid tastefully to the rosewood faceplate.

This neck is massive. A fingerstyle-friendly 44.5mm at the bone nut and a fat, rounded profile is likely to put some people off.

But on the upside, a good chunk of mahogany - one piece for the neck, heel and the whole headstock - is good for tone, and these dimensions also help to minimise fatigue when playing over long periods.

While the ebony fingerboard feels clean and precise, it's slightly surprising to see it paired with a Brazilian rosewood bridge (collar and cuffs, so to speak, usually match), happy as we are to have a taste of that most hallowed of tonewoods.

Takamine's customary split saddles appear here in bone - split to minimise the intonation compromises of a single saddle - while the bridge is a traditional pinned type, not a top-loader like many Takamines.

Gotoh open-back machineheads are a nod in Waverley's direction. The uninitiated might baulk at the idea of open-backed pegs, but they are light in weight - which some would say is important for the neck's resonance - and very high quality.

They look great in antique gold, too. This version of the Bluegrass comes with Takamine's CTP-1 Cool Tube preamp that uses a lone 12AU7 valve running at low voltage.

It offers master volume, bass and treble control, and a parametric mid which is useful for controlling feedback.

You also get an in-built chromatic tuner, plus you can add a second source to the undersaddle pickup: an internal mic or soundhole pickup, which can be controlled with a separate volume pot.

The only downside is that with four AA batteries the CTP-1 adds significantly to the overall weight of the guitar.

Players and pundits generally agree that Takamine dreadnoughts have 'a sound', and we'd say it sits roughly between classic Martin and Taylor benchmarks; zingier and with less authoritative mid-range than a D-28, though not as crystalline and nouveau-USA sounding as a Taylor 810.

The TF360SBG fits that, but it's a far more developed, professional sounding instrument than any mid-price Takamine.

In fact, it's a wonderful sounding guitar for flatpicking and strumming. There's plenty of projecting volume, while the scalloped-braced top, traditional pinned bridge, ebony fingerboard and one-piece neck all make for a real singer.

Hit it hard and it responds without compressing or flapping. Pick it softer and you get sweetness and colour, with the ebony 'board keeping notes separated and clear.

Strum lightly with a thin pick and this guitar will layer beautifully in any Americana-flavoured tunes - just like its principle inspiration.

Plugged in, you can dial in the valve stage which adds progressively more warmth, gain and depth.

The basic tone is good, but more impressive are the dynamics; the Cool Tube feels slightly more forgiving, natural in fact, than a 'normal' acoustic preamp, bringing an improved sense of overtones and 'body'.