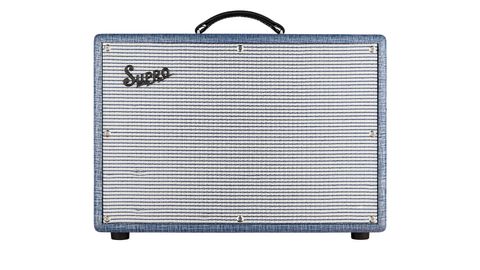 With massive clean headroom, this is a perfect amp to run your outboard effects into - it looks damn cool, too!

Retro continues to be the new black in the world of guitar amplification, with old names resurrected almost on a monthly basis. Sometimes, though, the heritage of a particular brand makes us sit up and take notice; that's certainly the case with Supro, which relaunched at this year's winter NAMM show with updated versions of three of its best-known designs.

Here we're looking at one of the first new models to make it over the Atlantic: the range-topping Coronado 2x10 combo.

Looking as if it just arrived through a time warp from the mid-1960s, the cabinet is built and finished to a high standard, with blue rhino hide vinyl, silver sparkle grille cloth and a white piping accent.

The minimalist control panel is quite similar to the original, with volume and tone knobs for the two channels, and speed and depth controls for the valve-powered tremolo effect. Inside the chassis, most of the electronics are contained on high-quality printed circuit boards, which hold nearly all the components, including the valve bases.

The preamp valves are mounted on one board horizontally, pointing forward, while the phase splitter and power valves sit on the other PCB, that hangs vertically on the underside of the chassis.

Two special-design 10-inch loudspeakers are mounted to the rear of the Coronado's front baffle. There are sockets for an extension cabinet and a footswitch for the tremolo effect.

There's no channel switching - although it is possible to swap between the two input jacks using a standard A/B footswitch. One interesting feature of the new design is the way the inputs have been organised, with one jack connecting to channel two and the other connecting to channels one and two, in parallel, for slightly more gain.

The overall vibe blends retro cool and traditional styling with high build quality, and the amp should appeal to many mainstream players.

The Coronado's non-master volume design means there's only one way to get the amp to overdrive - and that's to turn it up. With around 35 Class A watts and a pair of efficient 10-inch drivers, the Coronado is very loud and clean, retaining its clarity nearly all the way to full volume.

The character is warm but with a distinct bite as you dig in; more 'blackface' than tweed, and ideal for blues, country and rockabilly, with fabulous touch-sensitivity due to the valve rectifier. The tone controls work okay, but we'd like a bright switch for a little extra top end. The Coronado's clarity also makes it a great platform for effects.

True to the authentic 60s vibe, there is no effects loop, so you can only position things between the instrument and amplifier. But the results are very impressive and the valve-powered tremolo effect is perfect for classic 50s and 60s American pop and rockabilly.

Some of the best sounds we got on the Coronado were with the bridge pickup of an Ibanez archtop jazz guitar, using the tremolo and a Zoom MS100 to add a hint of spring reverb.

It's huge headroom makes it a great platform for outboards, but if you want controllable overdrive sounds at anything less than ear-splitting volume you'll need some help from an external drive pedal.

Not just for retro tone lovers buying nostalgia, the Coronado makes a great centrepiece for a modern rig.