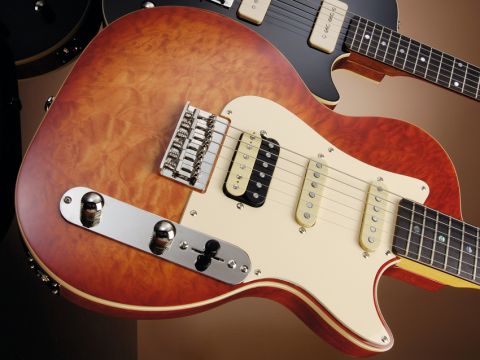 Although the IV's five-way lever switch should be binned at the earliest possible opportunity, it's the only blot on an otherwise positive landscape. A working guitar with an earthy, bluesy twist - we could all do with one of those.

The birth of St Blues goes back to the late sixties when Charles Lawing and Tom Keckler were working at Mike Ladd's Guitar City in Memphis, on what is now Elvis Presley Boulevard. On a Led Zeppelin tour Jimmy Page had the duo overhaul some guitars and they even built a one-off as a gift to Elvis Presley from his father, which he can be seen playing in Aloha From Hawaii.

They designed the original Bluesmaster, which was sold by Strings And Things in Memphis, before Keckler left to help start Schecter Guitars in Los Angeles. This eventually led to the creation of the St Blues guitar line in 1985 that was distributed throughout the USA and lasted until 1989.

The brand attracted a number of big-name users - among them Eric Clapton, Billy Gibbons, Rick Derringer and Psychedelic Furs' John Ashton - and was resurrected by Legendary Gear, with Keckler and Lawing as advisors, in 2006.

If the shorter scale and mahogany/P-90 configuration of the Mississippi Bluesmaster is clearly more Gibson-inspired, the Bluesmaster IV with its longer 648mm (25.5-inch) scale is more boutique Fender-style with a two-piece ash body, maple neck, Tele-style control plate and scratchplate-mounted pickups.

The IV employs the same body outline as the Mississippi but it's bound on the top edge only, and we have both forearm and ribcage contours. The scraping on the binding is slightly less precise here, although the quilted maple veneered face adds a nice bit of posh and it's noticeably weightier than the Mississippi.

The more boutique vibe extends to abalone dot inlays, but generally the neck is close in feel. The cream-coloured single-ply scratchplate works well with the Telestyle control plate - here a Strat-style five-way lever pickup selector (with Tele knob) is used - but the chamfering of the scratchplate's edge is a little wayward, as is the fit around the neck area which very slightly throws out the pickup positioning. It's a minor detail but there is room for improvement.

The middle and bridge selection doesn't split the humbucker so we get a good powerful but honky mix. Again, you're immediately at home in a sweaty blues club but you have a little more power on tap and some good, percussive rhythm/Texas blues tones.

Once again the pickup heights need a little work; there are some double-note wobbles from the single-coils but adjustment is easy and pulling them down a little also loses some of the spiky highs. In fact, a few minutes spent tweaking this sample made the world of difference.

There'll be many players that miss a vibrato on this model but, conversely, there's a simplicity that provides stable tuning right from the off.

Niggles? Well, that five-way seems a little flimsy and crackles a bit which doesn't inspire confidence and would need changing in the near future.