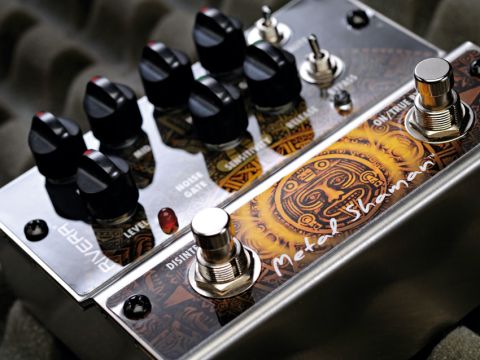 "Why bother going into development and manufacture just to have a 'me too' product?" says Rivera of his new range.

"Between the Blues, Double and Metal Shaman, I think we've created four distinct characters. We wanted to bring something new to the party and I think that we've definitely done that." Let's see…

The controls vary for each pedal. The Metal Shaman has level and distortion controls along with a full three-band EQ and a noise gate with threshold and release controls. There are two small toggles: one called Brutality, which is a gain boost and adds a lot of extra harmonic content, the other switches the noise gate on or off.

On this pedal, the second footswitch button activates a maxed gain setting called Disintegrate - handle that with care…

We used a variety of guitars, a Rivera Quiana and a Vox Bruno 1 x 12 to try out the Shaman trio. All three are exceptionally quiet in use; in fact the Metal Shaman is totally silent in between notes thanks to its noise gate that many metallers will find indispensable.

The release control makes it simple to set the gate up so that it tracks your playing effortlessly - in fact after a few minutes' use it's quite easy to forget it's on.

Rivera amps are used extensively by some top metal players, so as you might expect, this pedal's distortion capability is insane - there's no other word for it - but what's more important is how much control there is.

The EQ is massively powerful, enabling you to go from extreme Hetfield- and Mustaine-approved '80s-type scoop, through to more mid-rich modern metal leads that befit the likes of Alter Bridge.

There's always an aggressive edge to the clip too - which can be unruly and almost fuzz-like in its breakup at times - so if you want that digital-modelling, mega smooth metal-type tone, this Shaman may not hold the enlightenment that you seek. If you want to be heard, however, it's exceptional.