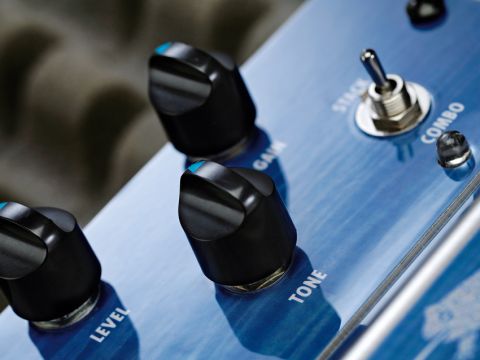 "Why bother going into development and manufacture just to have a 'me too' product?" says Rivera of his new range. "Between the Blues, Double and Metal Shaman, I think we've created four distinct characters. We wanted to bring something new to the party and I think that we've definitely done that." Let's see…

The controls vary for each pedal. The Blues Shaman has the simplest layout, with knobs for gain, tone and level. There's a stack/combo tone switch and the second footswitch button operates a clean boost function called Ascension.

We used a variety of guitars, a Rivera Quiana and a Vox Bruno 1 x 12 to try out the Shaman trio. All three are exceptionally quiet in use. The Blues Shaman has plenty of Fender Tweed- style overdrive on tap if needed, right up to completely crapping-out - albeit with less ultimate compression - to Neil Young-approved levels.

Perhaps where it really excels, however, is at lower gain settings, with superb touch-sensitivity and dynamic response, creating a powerful boost that's not completely unlike, dare we say it, the fabled Klon Centaur.

Switching between Stack and Combo modes either adds or takes a way a dollop of 4 x 12-style, loose-feeling bottom end resonance, while the boost function kicks it all up that bit higher.

It might say 'Blues' on the front panel, but we can see this getting used in all kinds of genres, such is the range of its gain, EQ and level capabilities.

Now hear the Rivera Blues Shaman in use...