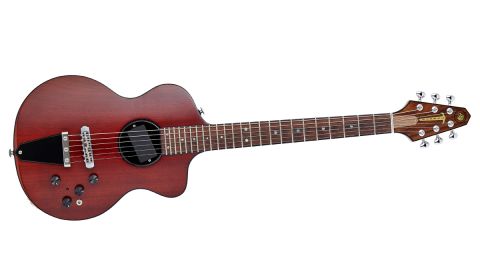 It's far from cheap, but apart from being a real road horse, it's the undeniable creativity of the guitar that wins us over.

Rick Turner isn't exactly a household name, but many musicians have been touched by his guitars and his basses.

Lindsey Buckingham has famously used Turner's guitars throughout his career, and John Mayer is a recent adoptee.

"We are essentially a custom shop," he tells us. "Every instrument we build has a very complete work order with every possible option listed that my guys and I follow."

"I got to know Lindsey Buckingham and the band when they were recording Rumoursin Sausalito," he continues. "John McVie was using, and buying, Alembic basses, and I was working on Lindsey's guitars. Lindsey and I have similar musical roots. He plays with his fingers, not a flatpick (well, usually); he's basically an acoustic player gone electric. Me, too. So the idea of designing a guitar that would feel right to an acoustic player, would deliver the kind of detailed tone that you get from a fine acoustic, but then be able to go toe-to-toe with any Les Paul, but maintain more of the clarity of a Strat: that was the goal."

Although plenty has changed in the way Turner makes his guitars today, not least CNC technology, the guitar is pretty similar to the one - number three - that Buckingham purchased back in 1979. The compact body shape, inspired by what Turner believes was an old Stauffer, measures just 298mm across its lower bouts; the body length is 410mm, with an overall depth of 60mm. It's weighty at 4.15kg (9.13lb) and that reflects its solid mahogany construction - two halves, top and bottom, which have their outer curves shaped, then the interior electronics cavities cut, before they're joined and bound on both top and bottom edges.

The maple neck is glued into the body and it's a multi-laminate design, the main spine having two purple heart stringers while the heel is an additional piece with contrasting heel cap. Likewise, the headstock, is faced back and front before being joined to the main neck.

Aside from the compact design, the most notable feature is the neck-placed, Turner- designed-and-made passive pickup set in a circular hole. The idea is you can place this where you want and an Allen key bolt on the reverse side allows you to rotate it and then lock it in place. The key is finding the 'sweet spot' for your rig and ears.

Various versions of the Model 1 are available, not least in terms of electronics. Here we have probably the best-known setup with volume and tone, then, via a small toggle switch, you can switch in the 'quasi' parametric circuit (the red LED lights) with one knob to sweep the frequency range; the other, with a centre 'flat' position detent, is a boost/cut. The battery compartment, for the two block batteries that power the active electronics, lies under that plastic 'tailpiece'.

Despite the small size, it's a nice player seated and strapped on - although there's a slight neck pull - but it's easily balanced by your right forearm resting on the body. Yes, it's weighty but feels very comfortable, with the arched back pushing the face of the guitar and fingerboard up towards you.

There's a Gibson-esque, mid-pushed acoustic ring unplugged and the neck has plenty of depth and a slightly D-shaped profile with quite a bit of shoulder. We didn't mess with the pickup positioning and initially played with the parametric circuit switched out. You have to forget it's got a slanted 'neck' pickup, because what you hear tells you a different tale.

The range on the tone control is very wide from some high treble lift to, completely rolled off, a fairly typical guitar tone control-like character and you use that to direct your sound between your imagined 'bridge' and 'neck' pickups that you're used
to.

There is some background hiss, which sounds a bit intrusive, but roll the volume down (which doesn't seem to have much tonal effect in terms of the high end) and that hiss disappears, especially in a band context. The coil split turns off the neck-facing coil and creates a leaner edged, more sparkling 'bridge' tone, or an almost P-90-ish rounder nose 'neck' pickup with the tone control reduced. With a loudish Fender-style amp, we're hearing some juicy Americana-like tones that, well, just sound good: ringing and clear.

With the gain knob set in its flat position, there's virtually zero hum increase as you switch in the parametric circuit and that red LED lights. Add a little boost and sweep the frequency control, which seems focused on quite a broad midrange, and in its lower positions some fatter - indeed, quite fat with the gain increased - tones emerge, like a boosted Les Paul.

As you raise the frequency knob, it's like adding a volume boost to your Strat or Tele, especially in single-coil mode. Again, there is some background hiss but although concerning initially, if we're honest, watching your volume level - and there's plenty of poke here - and not over-boosting that parametric gain, it didn't bother us. A hugely creative guitar.

Occasionally, along comes an instrument that breaks the rules. There's a charm to its design, and it doesn't sound like, well, anything else we can think of, taking us from really stringy, acoustic-y single coil voices to full fat creamy Les Paul.

You don't have to be a Mac fan to enjoy it: any creative guitarist, in virtually any style, could use this versatile instrument.