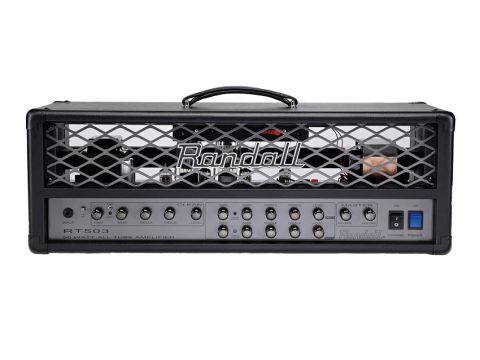 Definitely worthy of consideration for valve-virgins. Affordable and accessible if not aimed at heavier tones.

Many people associate Randall with its artists. Dimebag was a long-time user of the company's solid-state amps and co-designed the Warhead. Likewise, Kurt Cobain used a solid-state Commander to record Nirvana's debut, Bleach.

But Randall knows a thing or two about valves, too (take Kirk Hammet's use of his RM120KH to inflict crippling high-gain tone), and is now offering its pure valve designs at a more affordable price with the RT Series, a family of traditional valve amps aimed at valve first-timers.

There are four amps in the range: a 50-watt, two-channel head and combo, and a pair of three-channel heads available in a 100 or 50-watt format. The latter RT503, our review model, gives you the full three-channel design (clean, OD1 and OD2) with separate EQs per channel for a more manageable output level.

It comes fitted with a pair of US staple 6L6 output valves, but these can be swapped for EL34s if you're after a more British flavour. Biasing valve amps is usually best left to the experts, but the Bias control on the back of the amp lets you replace, swap and bias the valves yourself.

Randall's clean sound has been divisive, but the RT's dedicated clean channel goes some way towards remedying this. Boosting the preamp all the way for pushed sounds can get fizzy; it's better to let the 6L6s do the work by keeping the preamp gain below three-quarters and pushing the power section. The reward ranges from spiky funk with our Strat's singlecoils, up to a slightly driven jangle with humbuckers.

The clean channel's bright switch is subtle, but once you've cranked the output you'll notice the extra bite. Tipping OD1's gain control just above zero results in a solid 'in between clean and dirty' tone. Above this things get progressively heavier with almost enough gain for metal at the top.

Select OD2 and you might as well don a poodle wig, bust out the pentatonics and write an album that becomes known by its sleeve colour. This is 'Tallica territory. Where OD1 is fairly wide and open sounding, OD2 is tighter, meatier and, to our ears, more scooped.

The sub £1,000 price bracket has become a regular stomping ground for amp builders. While this amp does an admirable job of providing a range of sounds for different genres, Randall's heritage rightly implies a penchant for the heavier end of the spectrum, and the RT503 seems happiest when you really allow it to wail.