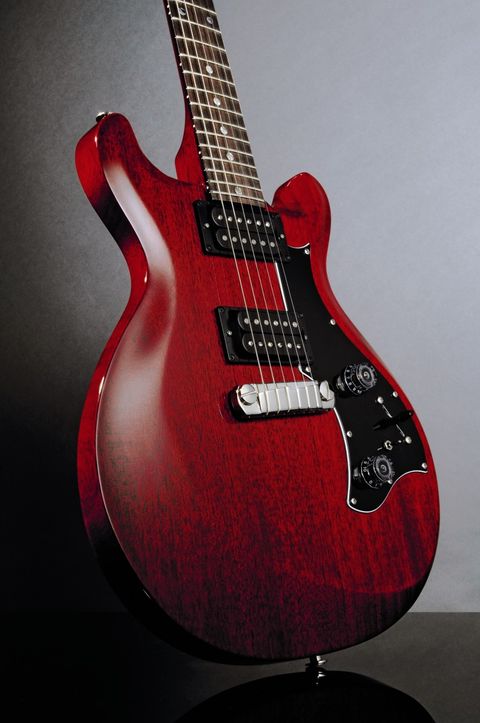 It´s the guitar we´ve been waiting for PRS to build for 22 years! Better late than never. Recommended

This all-mahogany design has its closest relatives in PRS's original all-mahogany Standard and the flat-top all-mahogany SE Standard. In fact, the Mira sits between the two: instead of the well-known complex carved top of the USA Standard, here the flat-top body is carved away from the base to the upper tip of the bass-side horn.

Typically guitars like the Gibson SG use a flat-cut chamfer to achieve a similar relief: here, that relief is subtly dished. There's a standard ribcage cut on the back and a tight radius to the top edge that's larger and more vintage on the rear.

The body is 7mm thinner than the USA Standard at 42mm, and from the playing position, with all the carving, it looks thinner still. "It allows us to use thinner wood and there's a certain sound you get out of it," says Joe Knaggs (head of PRS's R&D and Private Stock programme) who created the body design from an enlarged and altered PRS Santana outline.

The neck is altogether more familiar. In fact it's the exact same neck (wide-thin as reviewed here, or regular profile as an optional ), with the same moon inlays, fretwire and rolled fingerboard edge as you'd find on a 24-fret Custom or Standard. The impression, however, despite the same 25-inch scale, is that the neck is longer, created by the shorter bass-side horn and the fact the neck leaves the body on the bass-side at the 23rd fret, not the 22nd.

On a strap, the feel - by design - is noticeably different. It's slightly neck heavy although the guitar is perfectly manageable with a light weight of 7.5lbs, so it's really not a problem. Cleverly, Knaggs has created a very SG-like feel as well as a guitar that is easier, and therefore less expensive, to produce.

While both the 24-fret Standards (Satin and High Gloss) are offered only with PRS's vibrato, the Mira is a stop-tail-only model (the body is too thin to accept the vibrato unless it is modified). Whereas you might expect more vintage-style Kluson-alike tuners, PRS's excellent locking tuners are employed here, but feature new brass posts, one of many minor sound-led tweaks that PRS is bringing to its guitars.

The Mira is the only PRS guitar currently offered with its controls mounted on a scratchplate - here an attractive retro design made from black/white/black plastic laminate. The same material is used for the Mira-engraved truss rod cover - while the Mira humbuckers are mounted conventionally in black rings.

Volume and tone controls use the new 'lampshade' knobs, while the three-way lever (as used on the Johnny Hiland model) replaces the more common three-way toggle. Instead of using a pull/push switch on the tone control to split the humbuckers to single-coil we have a mini-toggle.

Firstly, the guitar almost revisits the more delicate feline feel of the early PRS instruments, especially with the wide-thin neck that's the same width as the wide-fat but thinner in depth. Strapped on, the neck feels really long but the light weight is a dramatic departure from, for example, the Singlecut's bulk.

A couple of unplugged strums reveals a superb ring and resonance and a clean amp tone produces a warm, bell-like tonality with a smooth 'nose' to the attack of the bridge humbucker and a warmer, fruitier voice to the neck pickup.

Splitting the coils, voicing the screw coils introduces a little hum (even in the non-hum-cancelling middle position) and a thinner, cleaner voice that avoids being too shrill or crisp-edged. Yet country style licks sound authentic, as does fifties-style rockabilly or jazz; turn down the volume (which has a treble bleed cap) and there's an almost electro-acoustic-like crispness.

Dial in some crunchy gain and the pretty, bell-like tones become instantly more aggressive - we're into classic Who territory, clean but biting. There's always the sense of resonant depth and dynamics to the sounds, you need less gain to be able to dig in and break-up the sound a little more.

At higher gains things mush out a little, but dialling in a little bite from your amp and a little extra gain from a stompbox, the Mira comes up with some tough and taut voices, less wide than a Singlecut, but less mid-heavy and nasal compared with a Custom.

There's quite an old-style organic musicality to the sounds that makes the Mira surprisingly versatile. PRS may be aiming the guitar at a more modern band in terms of image and sound, but many of us who were brought up on old Les Paul Specials and SGs are going to appreciate the classic mahogany grind that the Mira effortlessly produces.

This Mira guitar is aimed, squarely, at the sort of player that doesn't get off on the typical PRS aesthetic, or their supposed modern rock-only sound. While PRS would no doubt like to see it slung around the neck of a skinny young popster, it's just as likely to find a home with an older, chubbier pub rocker.

Why? Because not only does it have a way more affordable price tag, it simply delivers that classic mahogany/humbucker sound that's just as much a part of guitar history as it is the sound of the modern crop of guitar-pop bands.

Typically, it's made and plays to the highest possible standards - a pro tool no question. As yet there are few options, but Knaggs sees the guitar as an "empty palette" so don't be surprised to see soapbar options, a 22-fret version or a satin nitro finish in the near future.