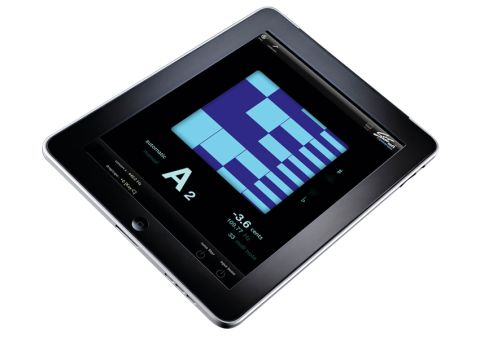 For many professionals, strobe tuners have been the way to go for years, and Peterson is the company synonymous with them.

After putting its strobe technology into stompboxes, it's now available in the form of the iStrobosoft (£5.99) for Apple's iPhone, iPod Touch and as the iStrobosoft HD (£11.99) - a new native iPad version - which we have here for review.

You can plug your guitar into the iPad using your usual input device, or use Peterson's own adaptor cable (£14) or mini capsule mic (£12), which are available separately. For acoustic guitars the iPad's built-in mic works just fine.

A chromatic tuner with all features on the main screen and no hidden menus, the iStrobosoft has glowing flat/sharp indicators and displays the note and octave with a cents display showing how far out it is.

The main strobe display, with its four bars of moving bands, looks great on the iPad and can be easily seen from across a room.

With accuracy to 1/10 of a cent, Peterson says that iStrobosoft offers the highest degree of precision available in a tuner app. And that makes it great not only for tuning but also for making intonation adjustments if you set up your own instruments.

For the asking price, this has to be considered a genuine bargain. And as long as you have your Apple device and a connector with you, you'll never be without a tuner.