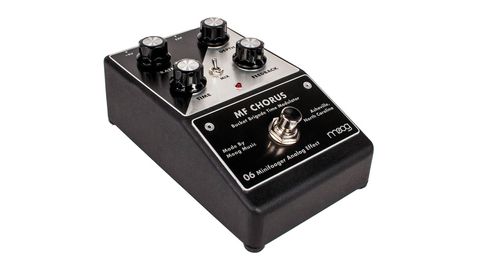 Gives traditional chorus effects a firm kick in the posterior.

It had its time in the neon glow of the 80s sun, but chorus is rarely found at the top of guitarists' wishlists these days. If anyone can revive its fortunes, however, it's Moog, which has added an all-analogue, bucket brigade chip-based chorus to its ever-so-sexy Minifooger range.

As it's Moog, there's more to it than just chorus, mind: there are time and feedback controls for extra resonance, while a three-way mix toggle flips between lighter and deeper chorus sounds, as well as a fully wet vibrato.

As you'd expect from a pedal packing the same kind of chip found in the likes of Boss's fabled CE-2, the MF Chorus's core sound is warm and lustrous, and you can make it as gloopy or pristine as you like with the depth control and mix switch - from Summers to Cobain, it's all here.

There are some stunning rotary-esque vibrato effects at higher rates, too, but it's the time and feedback controls that really set Moog's offering apart from the pack, serving up flange-worthy swirls, sweet harmonic sweeps, slapback delay and revving oscillation - you can even use the feedback control to give your notes a creepy metallic sustain.

It's rare that a chorus pedal has us this excited, but then the MF Chorus is so much more than that. Admittedly, there are as many insane, nausea-inducing sounds as there are conventional settings, but that's all part of the fun.