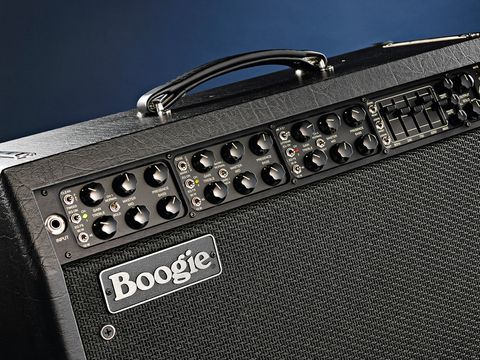 For those who came to the electric guitar any time after 1990, chances are that the name Mesa/Boogie will conjure thoughts of towering Dual and Triple Rectifier stacks - the amps that became the industry standard for hard rock and metal.

Rewind another 20 years, however, and Boogie main-man Randall Smith was making his name modding Fender Princetons into the world's first high-power 1 x 12 combos. The original Mesa-branded, snakeskin-vinyl Mark I debuted in 1972, starting a family line that finds itself here in 2009: the Mark Five.

Smith and his team have introduced some killer features over the years. From things we now take for granted, such as channel switching, through to channel-assignable power settings with valve or solid-state rectification. The goal of the Mark Series in particular has always been to offer a wide range of tones in a single amplifier. And boy does this do that.

The Mark Five is laid out logically, with each of the three channels getting the same complement of controls. Rotaries cover the basics of gain, master, bass, middle, treble and presence, while the first of the mini toggle switches determines its respective channel's mode.

Channel one offers 'clean', 'fat' and 'tweed' modes; channel two has 'edge', 'crunch' and 'Mark I'; while channel three has 'MKIIC+', 'MKIV' and 'extreme'. The channels are footswitchable, but the individual modes within them aren't. The gain and tone characteristics of each mode are so different, they're more about setting up the core tone of each channel, rather than tap-dancing within it.

Each channel has an additional voicing switch: channel one has normal/bold, which works across all modes and equates to a lighter and more bouncy feel, or slightly thicker with more punch.

In channel two you have normal/ thick, which works in Mark I mode only and adds mid-range punch and gain; it's useful for fattening out single-coils, but this reviewer has come to think of it more as the 'Santana switch'.

Moving to channel three, the switch works across all three modes again; dubbed normal/bright, it adds top-end for cut and definition when using darker sounding guitars and very high-gain sounds.

The single most important 'feel' factor in any amp is the relationship between preamp gain and power-amp saturation, and the Mark Five has a plethora of options to dial the right balance.

First and most obvious is the simple master volume set-up: separate gain and master controls to balance pre- and power-amp levels in each channel. Then, by switching in the effects loop on the rear panel, you can take advantage of the additional 'output' and 'solo' master volumes that offer two footswitchable output levels.

If you run these lower and the individual channel masters high, you can get an additional level of squash and drive at lower volumes; it feels almost infinitely tweakable, meaning that once you become intimate with the amp you can kiss goodbye to those frustrating too-compressed or uncomfortably bold moments. When the effects loop is switched out, it's completely hard-bypassed, meaning each channel master is the last stop.

Each channel also has a switchable power output level for 10, 45 or 90 watts; outputs switch automatically when you change channels.

The 10-watt mode configures two of the four 6L6 power valves to run in Class A; 45 watts runs them in class A/B, while 90 watts brings in all four valves for Mesa's Simul-Class operation. It's all about headroom: progressively louder, bolder and with less compression as you up the power. But there's more…

In addition to the three power ratings, you can also operate the whole amp in either full- or Variac-power mode; the latter drops the voltage to make the whole amp hunker down and compress a little more.

Additionally, channel three has a triode/pentode switch, which offers a more spongy or bold attack. And on top of all of that, you can even choose to have valve rectification in the 45-watt modes of channels one and two. Time for a cup of tea.

You'll notice that imposing five-band graphic EQ to the right of the front panel. It's become a staple of Mark Series amps, known best for the classic 'V' shape beloved of many heavy rockers. As Mesa explains, it comes at the end of the signal chain, so its effect on your sound is huge, and you can use it in two different ways.

You can assign the EQ to be switched automatically in or out of any of the channels; you can also switch it in manually via the floorboard. Then, in addition to the five sliders, each channel also has its own preset contour curve, the amount of which you can set via one of the three knobs to the right of the sliders.

In each case it's a take on the classic 'V' setting - with boosted trebles and bass for an almost hi-fi-type tone. This means you can have the 'V' shape on the preset curve in channel three, for example, set something entirely different using the sliders for channel two, and leave channel one un-EQ'd - now that's flexible.

One thing that's remarkable about the Mark Five is how quickly and efficiently it switches through extremes of sounds. To switch instantly from a high-headroom clean channel at 90 watts, to a dark and compressed crunchy rhythm sound at 10 watts, to a super-high gain singing lead tone at 45 watts, with the very minimum of switching noise is no mean feat.

In terms of overall build quality, this is very much modern Mesa: a sturdy birch ply cabinet, high quality leather-look black vinyl, leather corners and a tough mesh front grille. We've waxed lyrical about Mesa's construction standards in many past reviews and this upholds the reputation proudly.

Some amp buffs might turn their noses up at the custom PCB construction within, but again, as many amp designers will agree, the benefits of this kind of construction when done as well as this are obvious - uniformity and the potential to include extensive features.

This particular amp buff would like a big old jewel light instead of the somewhat more anodyne little blue power light, but space is at such a premium inside the chassis that it's hard to see how one would fit!

One practicality moan is that it's all but impossible to remove the footswitch from its pouch inside the rear panel due to the metal guard protecting the valves. The guard is there for safety, of course, but four screws later many players may never bother to re-fit it.

On top of all this, there's the parallel effects loop, multiple speaker outs, independent spring reverb level controls, slave out, tuner out with footswitchable mute and external switching jacks if you choose not to use the included controller. Anything missing? Nothing that's been invented yet, as far as we can tell…

Okay, three channels with three modes, multiple power options, EQ, low power modes, flexible master volume controls - it might be easier to talk about the sounds the Mark Five doesn't have than those it does, so here are some highlights…

Channel one's clean mode at the full 90 watts has plenty of high headroom, deep bass, high treble response synonymous with 6L6 output valves and a relatively powerful, efficient speaker. This is the really clean stuff; big and sparkly, which borders on three-dimensional when treated to some 'V'-shape EQ and reverb.

Moving to fat mode makes it slightly more 'Blackface' Fender in character, with more mid-range body and slightly more gain. Even in this second mode of nine you can push the gain and master, switch down the power options and start adding some fur and squash to notes and chords - something that increases further when you add more gain into tweed mode. Switched back up to full power, there's Texas blues response aplenty here, in fact all kinds of fat, rootsy light overdrive tones.

Channel two Brits things up a bit to begin with, while adding a crunchier gain in the first two modes and tightening the bottom end a touch. It seems to suit humbuckers particularly well, with the myriad power options again enabling you to go from a squashy drive where notes roll into one another and chords bloom with extra harmonics, through to a bold, strident tone that cuts hard and demands you play with more precision.

Channel two's jewel, however, is MKI mode - a recreation of the fabled amp complete with its visceral power delivery at 90 watts and harmonically rich distortion. With the 'thick' switch engaged, this is that singing, mid-rich lead tone that sustains forever with mahogany, maple and humbuckers. Whether it sounds exactly like an early Mark I is academic; it certainly has all the right hallmarks and a wonderful feel under the fingers, especially when you crank it up.

Channel three begins with another Mesa legend, the Mark II-C+, which piles on more gain and moves closer to early eighties metal sounds. This is heavily modded Marshall territory, but with more body and bottom-end, courtesy of that powerful EQ and the 6L6 valves, making it good for fusion and technique rock too. It's fun to experiment with the power options to really get it compressing and saturated to melting point.

The next mode is MKIV, which adds a more polished feel, with even more gain and an all-round modern feel. Then there's extreme mode - here there's more aggression and grind in the mid-range, with immense gain, sustain and articulation for modern metal riffing or cutting leads.

All that, and there's still plenty more in the Mark Five. Its sheer range of clean to dirty sounds, with everything in between, is given full room to flourish with an extremely powerful EQ and versatile power options to get exactly the kind of drive, mid-range character, headroom and dynamics to suit your playing. Better still, those sounds are easier to dial in than on Marks of yore. Loud? Gloriously, and that's when it's at its best.

As the original 'boutique' amplifier company, Mesa/ Boogie has never been about following trends, but there's no doubt it's started plenty. The Mark Five lands in interesting times, amid a global economic squeeze and a market awash with retro-inspired single-channel new 'boutique' amps.

Is it out of step? Vehemently no: there are still many players who are looking for a fully-loaded amp that covers almost every conceivable tonal base. Moreover, while the Mark Five is absolutely stacked with features, not one feels like a marketing gimmick or sales tool - they all have a significant effect on tone and/or functionality - gig it, record it, hell, just look at it all day.

Some knowledge of recent Mesas will help you get to grips with it quickly, none at all will make the journey all the more enlightening. It's nothing short of a remarkable engineering and tonal achievement.