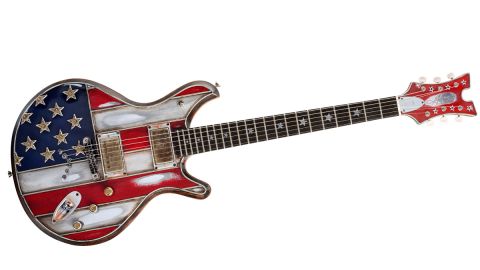 It's fantastic. We love it!

Stephen McSwain is a powerhouse.

He designs his instruments, creates the artwork, hand-fashions the aircraft aluminium fronts, then ages and assembles these fascinating beasts in his Oregon workshop.

McSwain offers a range of show- stopping instruments, our Red, White & Bullets model being one of his most arresting - pun only half intended. His customers number Steve Vai (who owns the very first), Jerry Cantrell, Vernon Reid, Jared Leto, Slash and many more.

Beneath our review instrument's flashy exterior lies an exemplary piece of work, with the best pickups and hardware, and aged to look like it's been rescued from some dusty shack lain derelict since the Confederate War. While a degree of computer technology does the donkey work, the craft side of things is all McSwain.

"I'm the wearer of all hats," he says. "I design, cut and finish all the metalwork, but in order to meet our increasing demand, I've been getting the aluminium inlays laser cut and it has reduced build times significantly. All the paint, textures, aged wear, and so on, I do by hand."

Although the guitar's appearance may suggest otherwise, construction is classic stuff. "It's a solid two-piece African mahogany body and three-piece mahogany neck with ebony 'board," Stephen explains. It's based on a tweaked double-cut 'Junior' body shape, and the ageing has a 'distressed leather' look, unlike the simulated playing wear of Fender's Relics.

The bridge, pickup covers and surrounds are nickel plated (the bridge is a TonePros unit), worn to the point where the copper under- plating shows through; V-formation through- body stringing removes the need for a tailpiece.

"I've always liked the burnished look of those exposed layers underneath the nickel," says McSwain. A painted facing plate and metal truss rod cover adorn the headstock, while around the back a signed and dated plaque sits between two rows of aged Kluson tuners. Oh, and those bullets are genuine Magnum .357 cartridge rims - fortunately spent ones!

The stars and stripes design of the top is made in sections and joined together with raised metal seams. "The metal seam is a ferrous metal I found that's perfect for soldering or welding," states Stephen. The coloured paint is worn through in places to complete the distressed look.

The pickups here are by Arcane. Company founder Rob Timmons has worked with guitar and pickup makers including Tom Holmes, Tyler, Trussart and many others, and his Triple Clone model powers the McSwain. Stephen says, "Rob tweaked the winding to give a specific tone to our metal-top, mahogany- body guitars. I then split the coils for a range of switching options." Ours offers coil-taps on both pickups.

McSwain reckons you can't go wrong with Gibson's classic '59 neck profile, and we would agree.

Naturally, this feels more Junior than Standard, and the 22 beefy frets are perfectly finished. Access to the upper frets is great - no problem playing pentatonics at the 17th, with a full-tone bend at the 22nd providing the double octave. As we say so often these days, it's a fuss-free neck that just feels 'right'.

Plugging in on the same day as we sound- tested PRS's 594, there's a definite kinship - a solid vintage tone that's dark but not too hot. It's a musical sound - less weighty than a Les Paul Custom and more defined than a P-90- driven Junior.

You've got to love makers that go out of their way to bring us something this different.

of 'proper' vintage tones. Don't mistake these instruments as some kind of novelty - this is a genuine piece of guitar craft, and who wouldn't love to be seen with one round their neck playing some dirty, sleazy slide?

"But it's three and a half grand!" we hear you scream. Yes, but when did you last encounter a guitar with so much of the manufacturer's blood, sweat and tears all over it? And that's rarely true with off-the-shelf, so-called 'boutique' guitars.