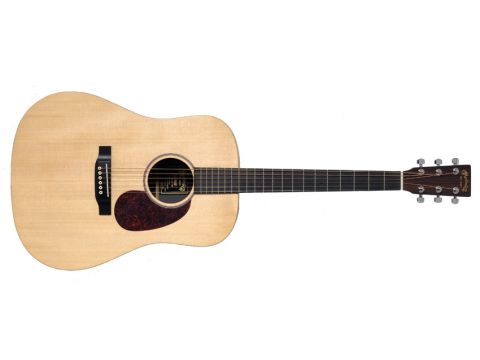 This price point is a warzone for the acoustic market, but the DX1RAE holds its own against the threat of the competition.

When it was introduced in 1998, Martin's X Series of electro-acoustics gave the tight of pocket a chance to sample the venerable American luthier's magic tone. The latest addition to the range, the DX1RAE, provides an update on the old DX1 with an undersaddle Fishman Sonitone system.

The DX1RAE shares the same dreadnought template that Martin created many moons ago, but closer inspection reveals the reason behind that attractive price tag. The neck, back and sides of this guitar are constructed not from solid timbers but from the same cost-cutting alternatives that the shrewd manufacturer has used throughout the X Series.

The HPL laminate back and sides are topped with an Indian rosewood laminate, while the neck is made of eye-catching rust stratabond that is married seamlessly to the solid sitka spruce top.

It's easy to pick holes in this approach. For the best part of £600, there are plenty of other options around that offer solid backs and sides, and the fact that this guitar was built in Mexico and not in Martin's traditional Nazareth, Pennsylvania heartland may also raise a few eyebrows.

But you needn't worry. The build quality of the DX1RAE is nothing short of superb, and it plays exactly as a Martin should. The bottom end is warm and resonant, the top crisp and taught, making it a lively match for heavy strummers.

There's something here for fingerpickers, too - the comfortable neck proves incredibly versatile. The DX1RAE loses none of its signature Martin character when you plug it in thanks to the well positioned undersaddle pickup, the controls of which are subtly hidden on the underside of the soundhole.

The X Series clearly still has some way to go before it wins over all the purists, but on the evidence seen and heard here it won't take too long. The DX1RAE looks, feels and - most importantly - sounds like a thoroughbred Martin guitar, which, at £599, is testament to its maker's commitment to exacting standards.

Admittedly, the laminates used in its body construction, and the stratabond neck material may not convince acoustic purists, but they certainly don't have any adverse effect on the tone or feel.