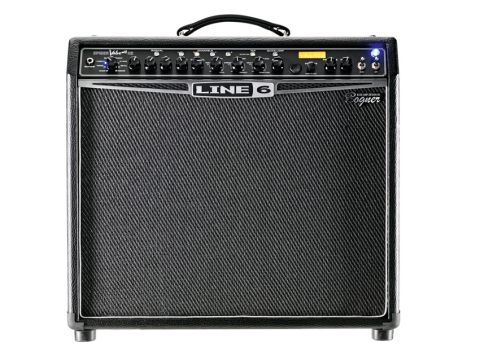 A whole host of a neat tools without compromising on the valve tone. The best of both worlds indeed.

Recently, our sister mag Total Guitar set in motion a 'battle royale' between the forces of solid-state and valve amplifiers. Valve won. Solid state couldn't quite match the warmth and tone of old-school tube technology. Of course, there is a third option: the hybrid.

When Line 6 spliced together solid state and valve technology, and a whole bunch of amp and effects models, with its original Spider Valve, we thought the ultimate hybrid had been nailed. Now it's launched the Spider Valve MkII and reckons "the best of both worlds just got better".

This update of the Spider Valve is available in three formats: the 40-watt 1x12-inch combo we have in our grubby mitts; a 40-watt 2x12-inch combo (£679); and the HD-100, a 100-watt head (£649). Looking at the amp's control panel, it's immediately obvious that Line 6 has upped the spec from its previous model with a bunch of extra knobs and buttons.

For a kick-off, there's a tempo tap control (for instant delay tweaks). You also get a Quick Loop function that records, loops and plays back a 14-second sample of your playing that you can then riff or solo over. To get the most out of this, you'll really need Line 6's FBV Shortboard MkII (£169).

The Spider offers 128 user presets and 16 amp models inspired by the likes of the Vox AC30, Marshall JCM900 and Mesa/Boogie Dual Rectifier. You also get 20 'Smart FX' inspired by some famous stompboxes like the MXR Phase 90 and the DigiTech Whammy.

The MkII can be expanded, too. Line 6's FX Infusion pack is a free download that offers another 28 models ranging from overdrive to modulation, reverb and delay.

Of course, none of this aural candy would mean a thing if the amp itself sounded pants. Thanks to a collaboration with US valve gurus Bogner (the folk behind modern classics like the Uberschall head), there's nothing to worry about on that score. The Spider Valve accommodates every style of guitarist and does it exceptionally well.

We love just how many extra goodies Line 6 has squeezed into its latest hybrid monster, and it's managed to do it without compromising that refined Bogner valve tone. The sounds on offer here are everything you'd expect from a pro-quality amp and you'll appreciated just how easy it is to dial in the tones you want on the go.

At 20kg the MkII is no lightweight, but that killer combination of features, tone and bargain price will have many players rushing to pick one up.

Hear how the Spider Valve MkII sounds over on the Total Guitar site.