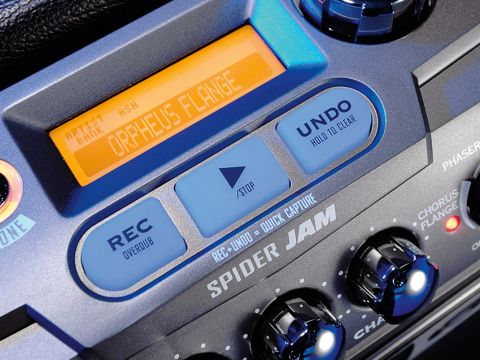 A unique practice facility combined with a stage-ready amp - essential for any practising player.

There are many aspects to learning to play the guitar, with solitary practice being the one that is likely to take up the vast majority of your time. However, if the aim is to play in a band, you will really only progress by getting together with other musicians and learning the art of listening to and playing in time with a rhythm section.

Getting live sessions together can take considerable organisation, so ideally there should be something to fill the gulf between practising scales and learning riffs on your own, and the act of playing with other musicians.

That halfway house has to be playing along with backing tracks and Line 6 has just come up with something that easily facilitates that: the Spider Jam, a combo amp that comes loaded with quality backing tracks for you to play along with.

Now, this concept isn't exactly new: Fender launched its G-DEC over three years ago. However, Line 6 has developed the idea with an amp of sufficient size to be able to hold its own at gigs while it also features onboard backing tracks recorded by some of LA's finest sessioneers. On top of that there's an onboard looping recorder with plenty of memory for recording your own backing.

The Spider Jam is a compact 75-watt combo equipped with a 12-inch Celestion Custom speaker (plus a two-inch full range tweeter for the backing tracks). Like the rest of the Spider III family, this is a modelling amp and you get 12 amp models selected by a front panel rotary knob.

There are 'red' and 'green' versions of Clean, Twang, Blues, Crunch, Metal and Insane models all based on famous names. The front panel offers the usual array of amp controls and there are three knobs to add effects.

The first knob selects either chorus/flange, phaser or tremolo and also dials in the strength of the effect from subtle to extreme. The second knob does the same for delay, tape echo or sweep echo and is allied to a tap tempo button, while the third simply turns up the reverb.

If you don't fancy dialing in your own sounds from scratch there are also a bunch of onboard presets, over 200 of which are artist-created alongside over 150 that are song-based and 36 user-programmable patches.

Your own backing band

The backing track facility consists of a whole bunch of pure drum loops but also over a 100 jam tracks with full instrumentation, categorised by musical styles. The tempo of the drum loops can be altered to taste and the pitch of the jam tracks can be changed to accommodate alternative keys - the tempo automatically altering up or down dependent on the change in pitch. All backing tracks can be put on endless repeat for sustained practice.

For the jam tracks, Line 6 tells us that it compiled a roster of A-list session players and recorded them at quality studios including Steve Vai's studio and Sound Emporium's Studio B in Nashville.

What you get are a bunch of tracks featuring players like Carmine Appice, Gregg Bissonette, Simon Phillips and Steve Turner on drums, Tony Franklin and Dave Pomeroy on bass plus a varied cast of other respected sessioneers including country guitar legend Brent Mason. An appropriate guitar tone from the presets can be loaded automatically with each jam track, or you can just choose your own.

Up to 24 minutes of CD-quality recording time is available with the recording facility and you can either record with or without the internal backing tracks.

As well as the guitar input there's a mic input with its own EQ, reverb, delay and compression plus an aux input to take sounds from a CD or MP3 player. You can either record from the guitar input or the mic input and the aux input can be simultaneously recorded with either if desired.

The length of your first recording sets a loop length and you can overdub more guitars in each subsequent pass. For anyone who wants to quickly capture newly thought-up riffs, there's also a 'Quick Capture' mode for instant recording. A stereo output on the back of the amp lets you save any recordings to a separate recorder.

Like other Spider models the Spider Jam can make use of Line 6's FBV foot controllers, either for the usual amp functions or to control the jam track playback, recording and looping.

Tune up with the onboard tuner and you can get stuck into trying out the sounds, which are the same as the rest of the larger amps in the Spider III series. What's on tap are some of the finest modelled sounds that Line 6 has to offer, with the amp models progressively getting dirtier sounding as you turn the front panel selector clockwise.

The presets show great attention to detail and there really is something here for everyone when it comes to dialing in a tone - exactly what you want when faced with backing tracks in many different musical styles.

Line 6 has really come up with the goods with these tracks - where computer programmed backing tracks can be a bit sterile and stiff, the studio recordings here actually groove and ought to provide more of the feeling that you are playing with a real band, and what a band this is…

Rock, blues, country, funk and others are firmly covered with tracks that are a real pleasure to play along to, featuring basic chord changes in various tempos and keys.

The backing tracks that come out of the amp powerful, crisp and clear and if you choose to have a matching guitar sound automatically loaded with the track, it usually sits deftly in with the backing so you feel an integral part of the 'band' rather than just floating over the top of it. However, any sound you choose can be quickly made to 'sit in' simply by adjusting the reverb and channel volume to taste.

It's an easy adjustment if you want to play a track in a different key, but it's best not to stray more than one or two semitones as the instruments start to sound unnatural with extreme pitch shifts.

Also, each key for any particular song will have a fixed tempo that may not be ideal. If you want to practice to specific tempos, the pure drum sounds are the way to go although, being real recordings, the pitch does change slightly with each BPM increment.

The drum tracks are also good inspirational fodder for songwriting plus solid backing when using the recorder - simple to operate and a perfect tool for working out new parts as well as recording your own chord sequence to play over.

There is no doubt in our minds that the Spider Jam is a killer product. It is one hell of a practice facility that, with sustained use, should improve anybody's playing in terms of timing, learning what notes fit in the various keys and increased versatility by familiarity with different musical styles. On top of that it's a perfectly capable gigging amp. It would take a very long time for any user to tire of what it has to offer.