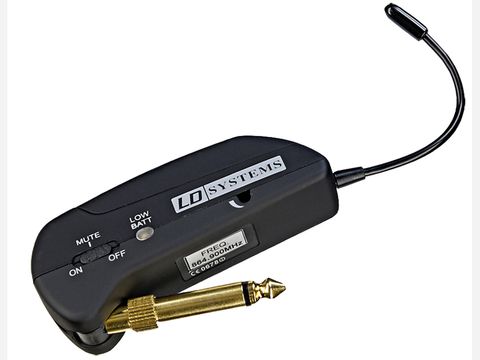 An excellent sounding system that provides true freedom at an entry-level price.

However, most wireless transmitters aren't completely wire-free, as they connect to the instrument via a frequently flimsy and problematic cable.

In addition, the transmitter has to be safely secured somewhere, with the solution often involving copious quantities of gaffer tape.

Introduced in 2001, Samson's Airline system was the first to feature a self-contained, ultra compact, plug-in transmitter that really was wireless.

Last year brought a new contender in the form of the terribly titled WS1603GTS from PA specialist LD Systems, and this third choice is now available here.

Like its equally cost-conscious competitors, the WS1603GTS keeps outlay down by operating on a single fixed frequency, with three options reserved for UK users.

The name has been appropriated from AKG and the design appears almost identical, presumably stemming from the same Chinese factory. The compact casing is constructed from rubbery-feeling black plastic and a flexible antenna protrudes from the far end.

A clip-on cover accesses the compartment containing a single 1.5V AAA battery; this is claimed to last around 10 hours and a side-mounted indicator light illuminates when power runs low.

Like AKG's equivalent, the Guitarbug features a spring-loaded jack plug that swivels to suit any sort of socket.

The Guitarbug may be a clone, but the LD Systems receiver is nothing like its AKG equivalent. The WS1603R is clad in a sturdy metal case and can be used freestanding or rack-mounted, although no appropriate kit is included for the latter.

A pair of antennae screw on to relevant rear sockets, which might make life tricky if the unit is installed in a rack case. They're also long in relation to the receiver and accordingly don't store neatly.

The front features an on/off switch, plus operation indicators for mains power and each antenna, while two LED arrays monitor RF and AF signal levels. The level control is small and quite fiddly, although it's not easily knocked out of position.

The back panel carries a balanced XLR output, an unbalanced jack alternative, the power supply input and a trim pot to modify mute level.

Setting-up is somewhat trial and error, as the manual offers very little user advice. Determining optimum operating levels is pretty easy, but those not experienced with wireless systems would welcome some explanatory assistance.

The obvious way to test a wireless system is to compare it against a top quality cable and aural end results are very impressive, displaying no appreciable departure from plugged-in performance. There's plenty of level and tone stays pretty much intact.

The sound is slightly smoother and less open at the upper end, but these changes are minor in the extreme.

Background noise is commendably absent, while reception is usefully far ranging although, as the manual suggests, it pays to adhere to a line-of-sight policy. The mid-position mute mode is a useful touch, as this ensures on/off operation is suitably silent.

In common with the competition, the WS1603GTS system offers convenience and ease of operation. Like its AKG opponent, it lacks the Airline's useful option of a stompbox-style receiver, but at least the example provided seems ruggedly roadworthy andworks very well.

LD Systems is the latest company to come to the no-cable table and the WS1603GTS system delivers excellent performance for a price that's currently the lowest around. Any guitarist who fancies cutting the cord should check it out immediately.