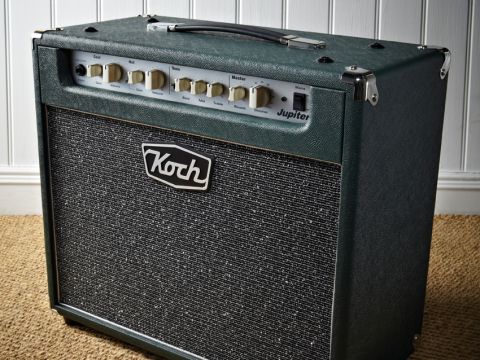 A superb grab-and-go club amp, perfect for the working musician and tonally in a class of its own.

Koch has re-entered the UK market with a revamped range of heads, combos and accessories, and there's also new distribution for the respected Dutch amp builder.

With a diverse list of clients/artists including Al Di Meola, Buzz Feiten and Reeves Gabrels, as well as a host of top players from the Netherlands such as Golden Earring's George Kooymans, Koch is a very popular and well-known amp brand on the continent and in the USA. It's good to see it returning to British shelves, and appropriately enough we're looking at an amp that could have been designed specifically for British players: the compact and very portable Jupiter combo.

With pleasing proportions and a slightly deeper-than-average cab expertly covered in textured green vinyl, the Jupiter's cool vintage styling and restrained appearance is already winning friends and influencing people before it's even switched on. The matte silver control panel co-ordinates nicely with the amp's sparkle grille cloth and silver piping, and makes a good first impression.

Koch's Jupiter combo is a hybrid design, which blends a pair of 12AX7 preamp valves with a clever solid-state output stage that promises to provide all the dynamic punch and sonic warmth of valves. Consequently, there's no output transformer, which reduces the overall weight by several kilos.

Owing to the hefty woodwork and a generous magnet on the custom Sica loudspeaker, the Jupiter's still no lightweight, but it can be carried with ease using one hand, which is something you can't say for many of its all-valve competitors.

Its electronics live inside a tough, powder-coated steel chassis; there are two main boards for the preamp and power supply, with a pair of smaller ones handling the front panel knobs and switches. The through-plated PCBs are very high quality and are connected by thick hook-up wires, which are all neatly routed and tied together, while the two output devices dissipate their heat through an oversized aluminium heatsink for cool operation and long life.

Both preamp valves plug into quality valve bases, which are soldered directly to the preamp PCB. While they aren't easy to get to quickly, modern 12AX7s are generally quite reliable these days, so mid-gig replacement is unlikely to be a problem you'll encounter in normal use.

Overall, the Jupiter's look, feel and build quality inspires lots of confidence - it's clearly built for professional use and certainly looks ready to handle the rigours of non-stop touring.

The Jupiter boasts two channels - Hot and Cool, with separate gain and volume controls - sharing a conventional passive bass, mid and treble EQ network. Extra flexibility comes from a gain boost switch on the Hot channel and a contour switch on the EQ that shifts the mid-range, bringing it forward and adding a little more aggression.

Towards the right-hand side of the control panel there's a level control for the Jupiter's digital reverb and a control called the Dimmer, which acts like an attenuator, adding some of the feel you would get from real output-valve saturation. On the rear panel, there's a channel-changing switch and a socket for the Jupiter's two-button foot controller, one of which changes channels while the other can be preset to operate either the reverb or the gain-boost functions.

A pair of speaker jacks, a simple series buffered effects loop and a speaker-emulated recording output complete the tour. Everything's neatly laid out and easy to understand, making the Jupiter very user-friendly.

It's an enduring fascination for us that some amps take a while to get the hang of while others instantly feel right, often within a few seconds of plugging in. The Jupiter definitely belongs to the latter category, immediately impressing with its rich and responsive clean channel.

Despite the compact enclosure, the Koch delivers a tight, punchy bass that flatters single-coils and humbuckers alike, with a sweet treble response that produces exactly the right kind of edge to add articulation without the awful tinfoil fizz that afflicts many hybrid designs.

Using a Strat, the Cool channel was actually quite warm thanks to the pair of 12AX7s, but stayed really clean, even with the gain control maxed out. A touch more gain to add a subtle edge of overdrive would have improved this channel's versatility, but even without it the Cool channel is still a thing of beauty - a perfect fit for country, jazz and blues.

The Hot channel is equally impressive; the valve preamp adds plenty of harmonic depth and a smooth overdrive that can growl when needed just by digging in a little harder.

Fans of Robben Ford, Larry Carlton and John Mayer will instantly get where the Jupiter's coming from: it's no Dumble clone, but the Koch's open and airy feel is firmly centred in that sonic genre and its wide dynamic range benefits players who like to work the amp from their fingers. This is enhanced by the Dimmer control, which adds a subtle compression effect when brought into play and balanced with the channel volumes.

The contour control adds a little more mid-range grunt. It's a subtle change; a great tweak for single-coils, though we'd like to hear more of it.

We're impressed with the Koch custom Sica loudspeaker too, which retains plenty of definition at high volume. Similarly, the Belton reverb module lets the amp breathe, adding a warm decay that flatters the Jupiter's tone, even if it's not ultimately as lovable as a full-on, valve-driven, long-tank spring reverb.

Still - and perhaps more important - as a whole package, plenty of people who heard it assumed the Jupiter was an all-valve design.

If you need a portable combo that doesn't sacrifice great tone through a lack of power valves, then the Koch Jupiter is a very strong contender indeed. It's equally well suited to dedicated amateurs and pros, and while it doesn't have the versatility of some rivals, within its chosen sonic boundaries it really delivers the goods.

Consistency of tone is a strong argument for an amp that doesn't have a valve power stage - as valves wear out, the bias drifts and the sound they deliver varies imperceptibly.

Most players accept this, but for some it's a source of frustration. The Jupiter produces the same sonic magic night after night with little or no tweaking needed, and should continue to do so for the foreseeable.

Perhaps it's a little pricey and other amplifiers offer more features, but there's no denying the quality of tone, which puts the Jupiter very much in a league of its own for hybrid designs.

It's good to see Koch return to the UK with an amp like this: one to check out.