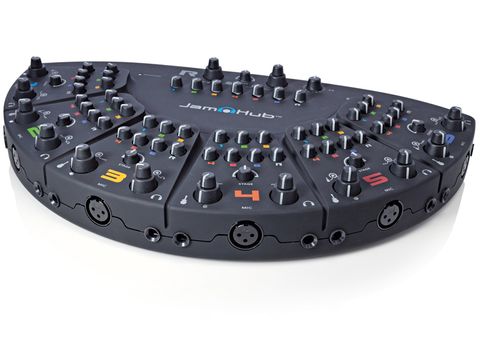 Not cheap, and a tad niche, but as an all-in-one, portable practice solution, JamHub delivers.

Band practices are a necessary thing but don't always run smoothly. Rehearsing at home at a reasonable volume can bring down the wrath of the neighbours and proper rehearsal spaces are not always available when you need them, can be expensive and can present problems in terms of lugging all your gear across town.

What then if someone invented a contraption that allowed a full band to rehearse silently wherever they wanted? That might sound too good to be true, but it's a reality with the JamHub, a new patented 'Silent Rehearsal Studio'.

What you get is a semi-circular multi-input device, half the size of a large pizza, into which you can plug a number of instruments and microphones, add an effect and then monitor the sound of the whole lot through headphones, each musician being able to balance the sounds to create their own personal mix.

The JamHub comes in three different versions. There's the Bedroom, with provision for up to five players; the GreenRoom, reviewed here, that will accommodate up to seven players and adds a USB input and phantom power; and the TourBus, which adds an integrated digital recorder.

The GreenRoom is divided into seven sections - six around the circumference and one (the R section) in the centre. Each section has a jack instrument input and XLR mic input plus a headphone socket and knobs for controlling instrument or mic input level, headphone volume and the amount of effect added to its mic input.

A further seven knobs let the user balance the sounds from each section in their headphones while a panning knob lets them position themselves on the virtual stage. Anyone, perhaps a keyboardist behind their rig not directly near the JamHub, can use a SoleMix remote with its 12 feet of cable to tweak their settings.

All the JamHub instrument inputs are in stereo so you will need a stereo lead or adapter to plug in. Guitarists can plug straight in but will need to use a POD or similar to get their tones as the JamHub has no amp sims onboard. Meanwhile singers with a mic can easily dial up a comfortable sound using the onboard reverb (delay and modulation effects also available).

The only questionable part of the equation here is drumming; given the silent-based nature of the product, players will have to use an electronic kit for there to be any benefit. Or you could just give them the night off and use an alternative source of beats.

The R section (while being able to accommodate a seventh musician if needed) is designated as an input channel for an MP3 player or similar and it joins your band's playing at the JamHub's output, appearing as a 1/4-inch jack out and recordable via USB.

The JamHub isn't going to replace the traditional rehearsal room - bands will always need to rehearse with their full acoustic drum kit and the guitar amps that they will be using at a gig - but it is a useful complement to that process and great for jamming.

Anyone who's had experience of drummers will know what an uphill struggle it is to get them to buy a drink, let alone a set of drum pads on which they'll be willing to practise, but for loads of bands the JamHub will be an absolute life-saver. It's not cheap, especially when adding in all the peripherals (headphones, potential amp sim etc) and there are definitely more affordable, more lashed-together ways of obtaining similar results, but balanced against the convenience and the potential savings it may prove a worthwhile investment.