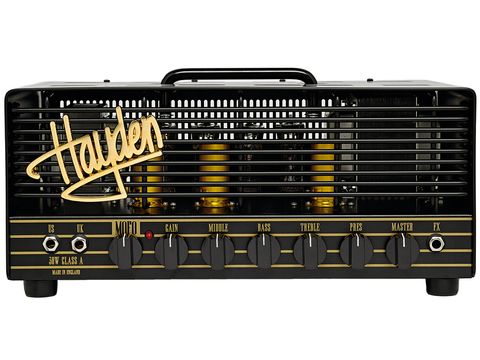 A generally decent amp, with more than reasonable power-to-price ratio, but marred by space-saving design features that could be irritating in use.

The Hayden's steelwork looks sleek and modern, with a front grille fabricated from round steel bars adding a nice design touch. The case is neatly finished in a satin black coating with gold silk-screened lettering and matching anodised preamp valve covers.

We've seen some independent reviews on the internet that might give the impression the Mofo is a point-to-point handwired product - it isn't. It may well be hand-assembled, but with a couple of exceptions the Mofo's electronics are all contained on one large through-plated printed circuit board, including all the valve bases and front panel controls.

Incidentally, if you weren't sure about the meaning of the word Mofo, the non-abbreviated version is printed on the PCB - high voltages notwithstanding, perhaps a good reason for end users not to unscrew the bottom cover!

Another is that Hayden has fitted a switch under the amp that drops the output to approximately two watts for home or recording use. It's a useful feature, but not easy to get to, or to see which mode the amp is in. The general standard of the board and its components is reasonably good, as is the soldering and wiring.

Overall, it looks the part and should stand up to a fair amount of use and abuse.

Hayden's Mofo is a versatile beast, with controls for gain, mid, bass and treble, presence and master volume. There's also a 'Mofo' control which is another preamp gain, plus a gain-boost function toggled on and off by the supplied footswitch - there's no other means of activating it.

There are two input sockets, labelled US and UK, which have tonal characteristics in line with what you'd expect to hear from a typical Brit or American amp. To the far right of the control panel, a single socket labelled 'FX' caters for the Mofo's series effects loop. This is a three conductor jack socket, with a common ground and separate contacts for send and return signals.

To use it, you'll need one of those adaptors that combines two mono jack plugs into one stereo plug, or a dedicated Y cable. It's fine in principle, but you're up the junction if you lose or forget the adaptor or cable: hardly the most practical inclusion.

As mentioned above, there's a slider switch on the chassis' underside labelled 'Stealth/Full Power', which reduces the output to roughly two watts and drops the volume for home use - again it's a useful feature, but the location isn't exactly practical. Same thing goes for the main power switch, which is a decent quality illuminated rocker, but mounted on the rear panel - not so useful if you happen to be on the other side of the stage to your amp when it dies midway through a number.

But these are all relatively minor criticisms, what's most important is how the amp sounds and responds.

The Hayden Mofo has a lot of headroom and punch with 30 watts of output power, and as a result its clean sounds are particularly usable. However, two gain controls, a master volume and a switchable boost makes setting up an ideal balance between lead and rhythm sounds tricky.

The Mofo can certainly kick out lots of filth, but not quite enough for a really good metal sound. The tone controls work smoothly, without any particular British or American bias. Overall, this amp is best suited to classic rock players and it's quite easy to produce convincing Queen, Zep or Bad Company.

The two-watt 'Stealth' setting isn't particularly stealthy as two watts is still plenty loud enough to annoy your neighbours, but it does enable the amp to be driven hard at more usable levels in a recording studio.

Hayden's Mofo has slick modern good looks with plenty of power for live use and a fairly useful low power setting. It may not have an instantly recognisable tone, but the Mofo's controls provide a lot of flexibility.

There are some good tones to be had from this amp, if you're prepared to work a little to find them. However, being different for its own sake is not necessarily a good thing: some features are irritatingly unpractical and should have been thought through prior to committing the design.

If the Mofo featured separate send and return sockets on the rear panel alongside the re-located Hi/Lo power switch, a mains switch on the front panel, and a pull switch for the boost function on one of the front panel controls, these few small changes would have made a big improvement.

Leaving the 'hand-built limited edition' blarney to one side, the Mofo's build quality is decent enough, it's good value for money and provides a toneful, portable solution for home, rehearsal and gigging use.