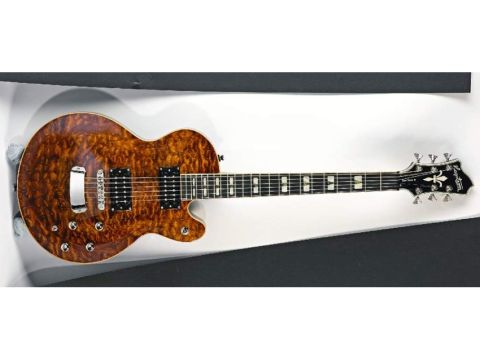 The Select Super Swede travels upmarket via some fancy woodworking and a selection of impressive sounds.

The Swede and Super Swede were Hagstrom's most successful six-strings before it ceased production in 1983, so naturally they figure prominently in the company's relaunched range, now offered in more luxurious form as the Select series.

The Select Super Swede sports the same Hagstrom headstock and tuners as the standard, but here the black face boasts a thick outer layer of pearl binding.

A graphite nut is cut to an equally high standard, while the fingerboard consists 22 medium gauge frets. Unfortunately these suffer from a sharp-end problem and a decent set-up would improve playability.

The Select Super Swede features a glued-in mahogany neck and the body is a combination of mahogany and maple. The Swede's shape is more Les Paul-like than other Hagstroms - bigger all round and with a narrow-ish cutaway formed by the rounded horn.

The heavily figured carved maple top is enhanced by an all-brown Cocoa finish, currently the only colour scheme available in the UK, although Hagstrom also lists Dirty Blonde or Vintage Sunburst on its site.

Natural finished maple binding adorns the front edge of the body in PRS-fashion, contrasting the reddish-brown of the back, sides and neck.

A 50mm body depth means a lot of mass at the neck join and this restricts upper-end excursions. The body back features some waist contouring and the guitar feels comfortable, although it exerts a considerable weight on the shoulder.

We get a brace of black-bobbined Custom 58 humbuckers and the pickup selector is on the lower bout, with a Les Paul-like control quartet down below providing volume and tone for each pickup, while a mini-switch activates single-coil operation.

The controls are topped with Tele-type, chromed knobs but we can't help thinking that something more appropriate, style-wise, is needed.

The bridge is a classic Tune-o-Matic while the tailpiece repros the original Swede/Super Swede design, with string ends secured in six chunky brass blocks mounted on a curving, clear plastic baseplate and hidden under a matching metal cover.

Acoustically, the Select Super Swede has a louder and more rounded sound than other Hagstroms, such as the Deluxe-F. This character contributes to a sweet plugged-in performance, no doubt helped by the inherent open tone of the Custom 58 humbuckers.

Their clarity's apparent in all positions, balancing the dark warmth of the neck pickup and keeping the bridge position bright but not brash.

Single-coil operation induces a drop in volume, but the sounds are impressive, with the neck selection in particular possessing a stringy, almost acoustic quality.

The Select Super Swede takes this model into more exotic territory than before and its deluxe appearance is matched by a pretty mature level of performance, although a poor set-up doesn't help matters.

This model faces very stiff competition in this market sector, yet anyone fancying something beyond the obvious should certainly try strumming a Hagstrom.