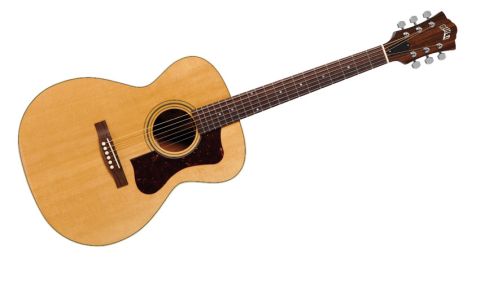 A superb, pro-grade picker that trades visual niceties for the most important tonal features and build. Needs a pickup as standard, though.

Guild is undoubtedly the 'other' classic American acoustic brand. Sat on proud foundations that date back to New York in 1952, it nonetheless had a somewhat rockier ride through the latter 20th and early 21st centuries than either of its principal rivals Martin and Gibson. During this period Guild has had to undergo major changes of ownership and strategy, not to mention moves between numerous production facilities.

Guitar giant Fender acquired Guild in 1995, and has certainly taken its time re-establishing the model line and brand. Initially built in Corona, California, then moved to the old Tacoma factory in Washington State, Guild has eventually found its new home somewhat closer to its original roots in New Hartford, Connecticut. Instruments started rolling off the line in 2009, increasing in number and variation ever since.

The F-30 hails proudly from New Hartford and for all intents and purposes is a 'classic' Guild model from the American-made Standard Series, which sits just below the top of the line Traditional range.

The F-30 is Guild's take on the curvier, thinner, orchestra-style instrument beloved of all manner of folkies and fingerstylists for a tone you'll often hear described as anything from "balanced" or "vocal", through to "focused".

Underlining that are the solid mahogany back and sides; mahogany can often have a cleaner, clearer attack and more defined string separation when compared with a similar guitar that uses rosewood for its back and sides.

Continuing through the woods, you will find rosewood on the fingerboard and bridge and there's a solid Sitka spruce top supported by scalloped red (Adirondack) spruce bracing. Red spruce is lighter and stiffer than the Sitka variety, so makes a lot of sense for bracing a top that needs to be light, strong and resonant.

Some people like red spruce for the entire soundboard too, especially those with a hard pick attack, or players requiring maximum headroom and clarity. It can take a little bit of work to get the most from such a top, however, which is perhaps one reason that Guild has opted for the (usually) slightly more forgiving Sitka on this guitar.

Finally, the F-30 comes complete with a high-quality TKL case.

There's something just so fundamentally right about the F-30. Absolutely no-nonsense from start to finish, it has an appointments list that puts function over form at every turn, for example the beautifully cut and finished bone nut and saddle, but a lack of excessive decoration.

The single-piece mahogany neck is finished in a fast-feeling satin lacquer that, coupled with the slightly wider nut, feels all at once modern yet traditional. There's enough meat in the palm and relief in the neck to appeal to fingerstylists who like to dig in, where you're rewarded with that punching tone that offers great string separation and projecting, but still with enough warmth to strum a chord or five, too.

The 648mm (25.5-inch) scale might mean that string tension is tough for those used to shorter-scale 'folk' guitars (such as Martin 000s), especially when strung with 0.013s, but it's a big part of why the guitar projects and sings as well as it does. Also, it's worth saying that it's a real bonus for drop- and low tunings where things can get a bit flappy and indistinct on a shorter-scale guitar.

It's not hugely bass-y, but it really comes into its own in a band, a recorded mix, or when accompanying voices.

It's a genuine pleasure to hear, see and feel Guild at the top of its game. If this guitar is anything to go by, the latest Standard models are absolutely up there with the other big American names, offering superb quality craftsmanship and world-class tone. Any criticisms we could level are purely subjective in terms of aesthetic or personal tonal biases: and besides, we're genuinely struggling to think of any.

All in all: a no-nonsense, yet thoroughly pro fingerstyle instrument.