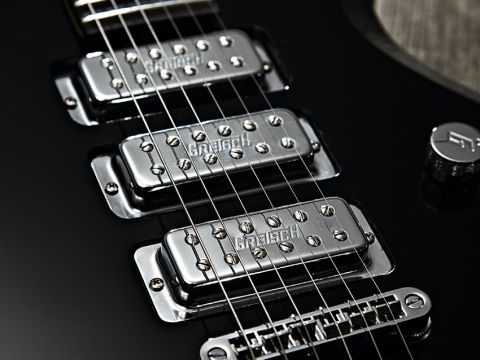 Leave your prejudices at the door: the CVT III is a little knockout.

Electromatic Series guitars aren't just a good way of getting your hands on an affordable Gretsch, they've actually developed a bit of a cult following in their own right.

For example, owners of the Pro Jet and 5120 semi-acoustic often rip out the existing pickups to replace them with higher spec TV Jones models. Type in 'Electromatic modification' into YouTube and you'll see what we mean.

Now Gretsch itself has got in on the Electromatic pimping fad. The freshly scrubbed Pro Jet and Double Jet models now feature pickup upgrades and new fingerboard inlays. There are even new models including this '60s classic reborn with, gulp, a bolt-on neck…

'CVT' is short for Corvette, the model originally launched by Gretsch in 1961. While the first Corvettes had slab bodies, the outline was eventually honed into the shapely beauty you see before you.

Our CVT III has a mahogany body with a maple neck held in place with four screws through a plate, just like a Fender. Yep, this guitar has a bolt-on neck, which is not the norm for a Gretsch, but more on that soon. The chubby profile neck is mated to a rosewood fingerboard, with a 305mm radius and 22 well-seated and dressed medium jumbo frets.

The hardware includes an anchored (ie screwed into the body) adjust-o-matic bridge and bar tailpiece. Again, this is not classic Gretsch, but it does a textbook job of keeping the strings attached to the guitar.

The CVT comes with a master volume and master tone control both manipulated with lovely chrome 'G Arrow' knobs. The real frontpage news is the trio of mini-humbuckers encased in chrome-plated covers.

These pickups were originally spec'd on Pro Jet and Double Jet models. We liked them plenty on the Jets, so we're expecting good things when we plug this Corvette into an amp.

The CVT III is a blast. The bolt-on neck actually works well on this guitar. It feels robust, like you can beat the hell out of it and it won't give up. It jangles through a clean channel but it really comes to life when you add some overdrive.

With the bridge pickup engaged it comes across like a miffed Rickenbacker; that explosive power-chord thing that you hear on Jam records. Selecting the other humbuckers one by one reveals some usable warmer tones, but it's the punk rock bliss in the bridge pickup that made our day.

In short, it's great when you find a budget guitar that punches above its weight. How about a single-pickup version, Gretsch?