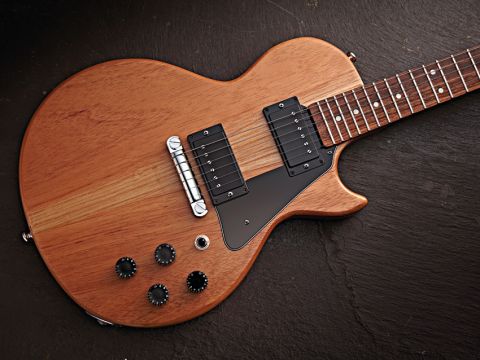 Hard to beat at this price - be proud of having the UK's own G-word on the headstock.

It's a funny old world, isn't it? Gibson puts out a new range of stripped-down, affordable Melody Maker guitars and we stick them on the cover, even though they fall below the standards we've come to expect from that brand in recent years.

Meanwhile, here in the UK for the past 36 years, John Smith and a tiny team have offered similar styling (and a lot more besides), always with superb customer service and even better value for money.

Production numbers are relatively small but steady, with a very sensibly priced list of options and upgrates. As this fine, simplistic electric illustrates, then, Gordon-Smith can show Gibson a thing or two.

Gordon-Smith Guitars (GSG) doesn't promote boutique-style quality, yet the honest blue-collar build is more than adequate to get the job done.

A thin (approx 35mm, just like the Melody Maker) two-piece, uncontoured Brazilian cedar body is tidily fixed to a quite-wide-at-the-nut, slickly playing cedar neck with a shallow-feeling 'C'-shaped profile: 20mm deep at the first fret; 23.5mm at the 12th.

That said, it does sport a rather tricky-to-adjust truss rod that's accessible under a small plate at the end of the neck. The finish is thin natural satin and is cleanly done.

The hardware is similarly basic: a simple wrapover bridge with only overall intonation adjustment, and smooth-geared Van Gent tuners. But then things get a little bit tricky.

We have an unusual brass nut that's height adjustable; proprietary GSG humbuckers; tone controls that are effectively bypassed at the top of their travel; and different valve capacitors as you pull up the volumes to split the humbuckers voicing the screw coils. Finally the output jack is side-mounted on a metal plate.

Slightly neck-heavy strapped on, the overall light weight makes that easy to handle. There's a lively acoustic ring and amp'd the output is hot vintage - we pulled the pickup heights down a little and preferred the slightly less in-your-face tonality and lower output.

Alongside a similarly constructed PRS Mira, the GS2 held its own nicely; there's a little less body to the tone here on the higher strings - we'd certainly up the string gauge - but the 'bucker sounds are right in that classic, timeless rock genre: nice bite and openness to the bridge unit; darker with more fluidity from the neck. Think Les Paul light.

Dial in a rawer amp tone and there's a definite thrashier punky edge - especially with the tone controls full up - but clean things up and the neck would handle a jazz gig with ease. The bridge coil-split does sound a little thin but, mixed with the full or split neck pickup, there's a very usable Fender-like edge and texture.

More gained metal tones are easily achieved from the bridge pickup but the guitar sounds most at home in those mid crunchy, frankly seventies Gibbo rock styles, yet still retains its own resonant, slightly lighter character.

A British hand-made guitar for a few pints of beer over £500? Stupid, but true. Throw in a list of options that none of the big boys offer and you have, on paper at least, the bargain of the century.

This GS2 60 would make a serious starter electric, spare, slide guitar or indeed a perfectly viable main guitar for any rock/blues player. It's a fine chassis to modify too.

Yes, it is voiced on the bright side of the Gibson tone tracks, but it has such a lively resonance that it sounds musical and expressive with it.

So, buy your Gibsons and be 'cool' or buy one of these, hand-made by one of the UK's most experienced guitar makers. Indulge in the paltry-cost options and know that you'll have one of the finest new guitars you can buy.