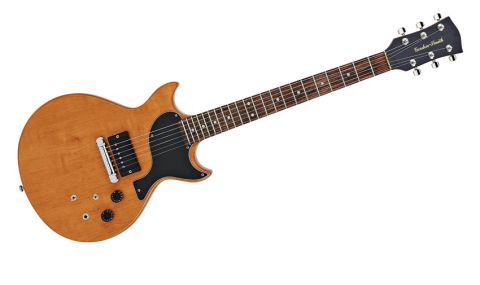 The first thing that strikes you when perusing the GS-1 spec sheet is that - unlike virtually any guitar we can think of at this lowly price, and certainly recently reviewed rivals like the Fender Esquire and Eastwood Airline '59 LP - Manchester-based Gordon Smith offers numerous no-cost and up-charge options. These really are custom, UK-made guitars for those on a budget.

The start-up GS-1 has a cedar body with a thin, SG-like depth of approx 35mm, which contributes to a lightweight feel. The glued-in neck is Gibson-like; the actual scale length is the correct dimension used by Gibson, slightly shorter than the (mis)quoted 628mm.

The neck has a fairly wide nut width and slim depth in its lower positions, but broadens out by the 12th fret to 23.8mm. Shape-wise, all GSG necks seem to have their own character; this one seems slightly asymmetrical in the hand - a slightly steeper shoulder on the bass side, but in combination with the low-rise wide frets and slinky setup, it almost plays itself.

We'd definitely go up a gauge or two if we were using this in anger. This instrument is actually a bit of an experiment for GSG: the fingerboard is 'charred' ash, though we thought it looked like a light-coloured rosewood, the standard wood used by GSG.

Typically, we have a height-adjustable brass nut, smooth Van Gent tuners, a one-piece wrapover bridge, a GSG ceramic humbucker with volume (plus coil-split) and tone that, along with the output jack, are all face-mounted.

The two additional switches engage the optional Volumax volume booster and Blacklab overdrive simulator, which we covered in our Gordon-Smith Ghost Rider review. For this test we'll ignore them, and instead we'll concentrate on the base-price instrument.

Gordon-Smith has its own way with pretty much everything and this GS-1 is no different. At the top of the tone control is a small notch that effectively bypasses it. We suggest you knock the tone control back a little, as otherwise this is quite a piercing-sounding guitar.

There's plenty of clout, but it's a little saturated and with a slightly papery/razor-y high-end. It also edges into feedback quite easily and thanks to the light weight, has a resonant 'seat-of-your-pants' kinda feel.

The coil-split reminds us of the aforementioned Fender Esquire's tone, but with a little more dirt: less metallic, more woody and percussive. Although not set up for slide, this writer used one for years as a slide guitar par excellence.

The GS-1 gets close to the Les Paul Junior's flame, but does so with a more primitive, punky resonance along with some 'hidden' textures, so long as you engage the coil-split and really use the tone and volume.

Check out this Gordon-Smith (and its host of options) if you want to experience a Junior-like ride. More experienced players, in particular, might enjoy the sonically versatile GS-1.