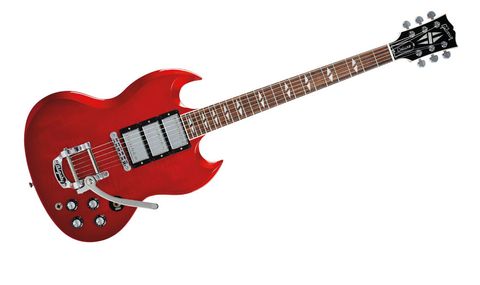 Maple top, three pickups, hot rod looks and a Bigsby? It shouldn't work, but it absolutely does!

Gibson's SG hardly enjoyed an easy start. Dropping awkwardly into the world as the revamped Les Paul model in 1961, this thinner, sharper, more aggressive solidbody was a bold statement in how guitars were moving forwards.

As it turned out - amid contractual issues with Gibson - Les removed his name and by 1963 it was officially renamed 'SG': solid guitar, and has since gone on to acquire an identity all its own.

Gibson has offered all kinds of variants over the years, so we shouldn't be surprised to receive a new version that appears very un-SG-like at first glance. Although this update on the Deluxe format still leans more to the traditional, not least with its oh-so-retro Bigsby B5 vibrato.

An SG body seems extremely thin to Les Paul or Tele players; these measure just 34mm at the fattest point. The Deluxe goes for the traditional mahogany back underneath its maple top, around 16mm of flamed maple cap atop a mahogany back

The Red Fade finish has a vibrant look. Gloss nitrocellulose clear coats reveal the figured maple top that blends to solid red. The red has sunk into the mahogany's grain on the back and neck, but the clear coats over it remain flat and glossy - it's a great look.

The neck is mahogany. The Deluxe uses Gibson's slim '60s profile; we measure it at 20.8mm at the 1st fret, 22.5mm at the 12th. Although it's slim, the 43mm nut width and 305mm (12-inch) fingerboard radius with a bound, nibbed edge makes the whole thing a bigger handful than, say, an unbound Strat or Tele neck. The fingerboard is traditional rosewood.

With 24 medium jumbo frets and the SG's already extended neck position, upper-neck access is a breeze. Your fretting hand ends up a long way 'left' of where a Strat or Les Paul would be, but you adapt to it, just as you do the SG's customary neck 'whip'.

There's not a great deal of body or heel mass where neck joins body, so it's easy to bend the necks while playing. That's either a wonderful opportunity or an annoying hindrance depending on your point of view; we tend to treat SG necks like a subtle vibrato arm and constantly be shimmering notes and chords as they sustain.

Gibson's finishing and quality control has been the subject of much debate over the years. There's very little to criticise here other than aesthetic annoyances such as pickup ring heights not being aligned, control cavity plates not precise with their recesses and some untidy wiring. Binding is rarely 100 per cent perfect. Do you care? It's a contentious question, but this reviewer really doesn't.

The guitar has been factory Plek'd (a machine that does a pretty decent job of the frets, with the guitar under the right tension). Whether it's solely the work of the machine or some added human attention, it plays very nicely - exactly as you'd hope at this price.

Played clean, it has that urgent, forthright delivery that has less width than a Les Paul and more punch than a Tele. There's definitely an extra complexity compared with our reference all-mahogany SG Standard.

Light yet fat overdrive gives you an edgy blues delight, while a squarer clip brings brilliant classic rock crunch that, of course, screams AC/DC. Heavier gain is no problem: from rich, Southern rock and Texas blues right up to metal levels, the wax-potted '57 Classics seem like good all-rounders. If you dare venture a little Derek Trucks-type bottleneck, you get a hint of that eminently vocal midrange that makes the SG such a fantastic platform - sonically and practically - for slide.

The neck pickup feels overpowered compared with its bridge counterpart - we suspect all the pickups are wound the same, where the neck would be better balanced if it had a few less turns on the coils.

Bringing in the middle pickup, there's no Jimi-style out-of-phase honk, which is a shame, and you can't use the middle pickup on its own. Dialled in partially or fully, however, it does add some colour and width to any of the settings. Truth be told, we'd be happy with just two pickups, or better still, a phase option on the middle.

The SG Deluxe was one of those guitars that elicited an eye-rolling sigh when we first read about it. Four Marmite finishes, posh maple top, Bigsby - way too schizophrenic, surely?

Well that might just be the key to its undoubted, individual charm. An out-of-phase middle pickup would make it an unreserved success, but it's still an absolute cracker, offering a classic yet contemporary mix of looks, tones and feel: we love it.