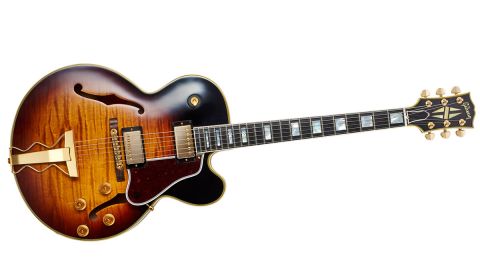 If you're working on the jazzier side of the tracks, the ES-275 is perfect - a modern take on a classic that oozes class.

Despite its huge heritage and perception of conservative style, Gibson is actually remarkably forward-looking and innovative.

Okay, not everyone gelled with the 'robot' tuners, brass zero frets (and the like) of some recent USA production models, but that's only one part of what the brand is about.

Gibson's Memphis division, which creates the mainly laminate 'f-hole'- styles, seems to take a different slant on modernism that's typified by the recent semi-solid ES-Les Paul and the downsized ES-339: classic guitars but with a different spin. This year, Memphis introduced another in the form of the ES-275.

And while plenty of its Historic-style output centres on highly 'old-looking' VOS finishes, plenty more core models have a contemporary gloss sheen and 'posher' figured woods, like our trio here.

There is plenty of commonality in our three review models: laminate woods, neck shapes, pickups and hardware yet each one retains a hugely individual character that, depending on your preference and style, might just be the guitar of your dreams.

Today we're looking at the ES-275 Figured. "This came from Japan, actually," said Mike Voltz, director of R&D/product development at Gibson Memphis, when we spoke earlier this year at the winter NAMM show.

"I was there eight or nine months ago. We go over a couple of times a year to support the market and look out for new trends. A thing we noticed is that a lot of younger players have discovered jazz - their request was for something that wasn't so 'old'.

"The neck is a Les Paul neck," continues Mike, "with 22 frets and all of a sudden you've got access, but it's a jazz box - totally hollow and it's braced like an ES-175."

In the flesh, this outline works perfectly: it's a design from a bygone age, updated for the modern player. It's 385mm ( just over 15 inches) wide, much smaller than the 432mm (17-inch) bulk of the L-5 and many other Gibson archtops, and the neck joins the body at the 16th fret, not the 14th. While our Figured version has block inlays and ES-355/Les Paul Custom-style head logo, the standard version, in Faded Cherry, has ES-345-style split parallelogram inlays.

While it follows Gibson's classic laminate wood construction, in this Figured version the outer maple veneers of the back and top back are quite heavily flamed through the new Montreux Burst finish (named after the jazz festival, of course), which is quite a muted mid-brown in the centre with a darker outer 'bursting - the same colour as the sides, through which you can see subtle flaming.

Despite the gold-plated 'zig-zag' tailpiece (hand bent on the original tooling), tune-o-matic (on a pinned rosewood foot), pickup covers and Grover tuners, the overall look remains hugely classic, and not overly blingy or posh. Incidentally, above the Studio level and excluding the Historic models, all core Memphis ABR-1 tune-o- matics, as here, have titanium saddles for this year.

Why? "We really like the sound," says Mike, simply.

The toned topcoat of the nitro finish gives the cream outer binding a vintage nicotine-stained hue (except the bound edge of the tortie pickguard, which is brilliant white), while the unbound f-holes are black painted. Internally, it's very clean, too, with kerfed linings and dual longitudinal top braces from 'red' Adirondack spruce - a very tidy job.

Controls are classic Gibson, although the angle of the diamond layout is slightly flatter than a Les Paul or ES-335, just as you'd see on a classic L-5, along with that rounded Florentine cutaway.

We also get a shoulder-placed toggle that sits in a thick rubber grommet. There's very little to moan about here, perhaps with the exception of the rather random-looking pickup angles, especially the over-slanted neck 'bucker.

Aside from the 'Patent Applied For' sticker on the back of the humbuckers, there's no specific ID, though the specs tell us they are Gibson MHS (Memphis Historic Spec), which Gibson has called "our most accurate PAF reproductions yet" with scatter-wound, slightly under-wound mismatched coils, an Alnico III magnet in the neck 'bucker and an Alnico II in the bridge unit.

Even just looking at the ES-275 you feel you're entering an exclusive club of the Gibson Archtop - no riff-raff allowed here! This perception is certainly confirmed by the clean amp sounds, especially the neck and neck/bridge combination.

Even with the volume and tone full up, the neck sound is quite velveteen in the basses with bell- like clarity from the high strings. There's lovely hollowed snap from the mix and even the sharper bridge with a little tone roll-off adds some attack to the low strings (without rattling the wine glasses).

'Jazz', of course, is such a catch-all, but the ES-275 is remarkably pliable. It exudes smoothness, especially with volume and tones rolled back a little, and has a tonal depth that, again, is sometimes lacking - purposely - from a shallower thinline style. At lower volumes, it creates rootsier Americana sounds that edge into break-up, not to mention chewier blues. Also, achieving much funkier soul/pop voices is easy.

It's this balance of chiming clarity with old-school depth that's so appealing in a body size that's big enough to feel very comfortable seated, but not too big to make you feel swamped. There might be "no money up there", as they saying goes, but the extended range and access is welcome and feels very natural, not least for higher chord voicings.

We did find ourselves raising the wound G string's pole piece - it sounded a little quiet compared with the plain B and wound D, but don't pigeonhole this one. Yes, 'jazz' ain't a problem, but that's like saying you can only use a Telecaster for country picking. The ES-275 is a beautiful, musical guitar.