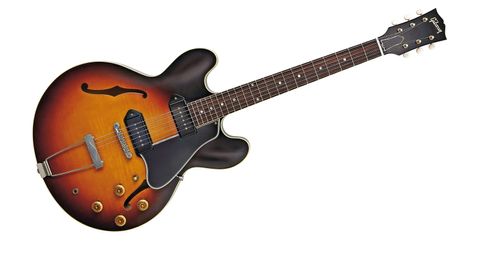 Arguably not as versatile as an ES-335 due to its hollow body, but its lightweight feel and hugely evocative sound are exceptional.

Pulling the beautiful ES-330 TD from its hard case is as close as many of us will get to time travel. Gibson's V.O.S. treatment isn't relicing as such, but the slightly dulled finish and hardware certainly creates an old appearance: this is not a bright, shiny, new-looking glossed guitar. We're struck, too, by the light weight: compared to a Les Paul, it's like handling an old Italian violin.

Of course, the light weight is down to the fact we have no centre block, as on the ES-335. The other primary difference to that classic recipe is that the neck sits further into the body, joining at the 16th fret.

Removing the neck pickup, you can see a wide maple block that stops just before the pickup cavity, into which the neck is fitted. We also see the kerfed spruce that is fitted to the contours of the top and back of an ES-335 so the actual rectangular section centre block connects snugly.

Here, although there's no centre block, that spruce is retained, on the top only, almost like a bracing down the centre of the guitar, which also provides a deeper thickness of wood to mount the pickups and the tune-o-matic bridge.

While the shorter, unsupported length of the neck - which in theory means it's stiffer than the longer neck of the ES-335 - certainly won't harm the sound, it's hard to get far past the 17th fret, which is also hampered by the chubbier 'Mickey Mouse' horns.

It results in a guitar that's shorter and has a slightly different feel, as the first position is less of a reach - compared to the ES-335, the nut position of the ES-330 is just past midway between the 1st and 2nd frets; the position of the tune-o-matic is pretty much the same as the stud tailpiece on the ES-335, and consequently the ES-330's controls are closer to your right hand.

The ES-330's neck is slightly clubbier than a '335, and its acoustic volume is a lot louder, more archtop-like with a punchier attack and shorter decay.

Plugged in, the sounds aren't as different as we'd imagined, especially played clean: compared to our ES-335, it's simply more hollowbody-sounding; older, if you like. The pickups work a little differently with the volume controls, too, softening and thinning out relatively quickly.

The much lower feedback threshold means that the higher-gain sounds that make the ES-335 soar aren't always possible, but that depends on your stage environment.

In lower-volume settings, there's a character that isn't in an ES-335; it sounds on the one hand much jazzier - Grant Green is a great reference - yet the use of guitars such as this, and Epiphone's Casino - are key to the first and second waves of Britpop.

There's a spiky and hard-hitting percussion to the bridge pickup, through to the mellower but funky-edged rhythm tones of the mix and the open, woodier, but still biting, almost marimba- like voice of the neck pickup. Add some crunch and things get very swampy: ideal for dirtier lo-fi slide sounds or alt-rock. It's a beguiling fellow.

The ES-330 has slightly compromised higher-position playability and susceptibility to feedback. But its light weight, acoustic and plugged-in sounds and sheer character make it, for any player whose reference point lies in the late-50s and 60s - be it jazz, blues, rock 'n' roll, soul or pop - an immense draw.