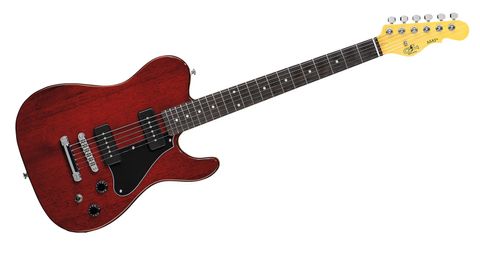 Built for rocking out, the Junior II is really the quintessence of G&L's ASAT design.

But superstitious readers fearing the ill fortune a doppelgänger brings can relax; with two P-90 soapbar pickups, the Junior is a different beast entirely.

Anyone who's had some fun on a Les Paul Junior will see the logic at play here in introducing a P-90-equipped variant of a classic.

Of course, there's no coil-tap, so comparatively, the Junior II loses a few points for tonal versatility, but it is more than game for handling high-output rock with plenty of character of its own.

The Junior has a warm and punchy tone, gutsy and raw through an overdriven amp, with precise, bright and sharp cleans. G&L is good for its promise that bridge and neck pickups are output-balanced; there's no dropout when switching between them mid-song.

We're not so keen on the ASAT's hard-rock maple neck, which is glossed and stained a mucky yellow colour that's somewhere between mustard and nicotine.

A brutish heel where the neck is bolted on inhibits access to frets 18 to 22, but only just - and really, who cares?

This guitar is most comfortable serving up the fives and sevens in pursuit of pentatonic pleasures; it seems built for rocking out without giving too much thought to what you're up to.