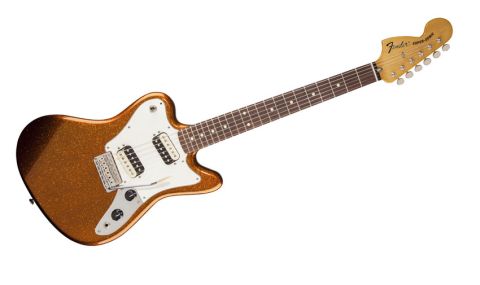 This revives a decidedly original Squier design and adds a few updates to add appeal for the modern market.

The Fender Pawn Shop Super Sonic actually resurrects a short-lived model first seen in 1997 bearing the Squier brand name. Back then, it formed part of the new Vista series and originated from Japan; second time around, it's a fully fledged Fender that's made in Mexico.

Unlike most other Pawn Shops, this model stays pretty true to its roots, so presumably the original design was deemed adventurous enough, and there can be few arguments on that score.

As on the earlier Super-Sonic, the lefty-look, large headstock comes complete with a protruding 'bullet'-style truss rod adjuster, but now only one string guide is considered sufficient. The vintage-style Kluson copy tuners differ to those used on Pawn Shop stablemates such as the Jaguarillo and Offset Special, because the post tops have deeper slots, making restringing an easier job.

Clay-like position dots are equally old-time, replacing the earlier version's pearloid markers, while side markers are sited along the fingerboard join in time-honoured manner. As usual, this makes them difficult to see - black dots set in the maple neck would be more practical, echoing some 70s Fenders.

The original Super-Sonic employed a basswood body, but these days, Fender seems quite coy about stating specific body timber details. Presumably, this is now alder, as used on the other Pawn Shop models, but it's hidden under a sparkly Sunfire Orange Flake finish.

Matching the neck, this model's body styling is lifted from the Jaguar and similarly reversed to create the left-handed look, but the overall decreased dimensions contribute to a more compact shape. Unlike some other 'upside- down' designs, high-end access to the fingerboard is good, because most of the neck is clear of the body. As before, a curved heel block serves to accommodate a small, angular neckplate that actually still sports the Squier 'S' logo.

The neck extends under the scratchplate to ensure secure anchorage, while one of the four fixing screws doubles as the upper strap-button holder.

The off-white scratchplate carries a three-way toggle pickup selector switch plus two Fender Atomic humbuckers, which provide the biggest visual difference between old and new Super-Sonics. Here, both pickups are mounted at a backward angle, not just the bridge pickup as on the original version. In addition, height adjustment is now via three screws rather than two, while the exposed bobbins are black and cream, instead of all black. Controls still sit on a separate metal plate and comprise two volume pots topped with Jaguar-style knobs.

Adding a Strat ingredient to the mix, the vintage-style vibrato unit is another constant factor, featuring bent steel saddles and a screw-in arm. The feel is responsive, but tuning drift is very apparent after a quick waggle or two with string-bending. A few tweaks will be required here.

The Atomic humbuckers are very potent components, staying true to their title output-wise, while the tonal character borders on brash and brutal, with an aggressive edge guaranteed to slice through the thickest mix. This comes across very strongly in all three pickup positions, although the both-on option adds some unusual honky overtones.

The previous Super-Sonic could be a quite subtle performer, but this one is undoubtedly intended to be up front and dirt-friendly, maintaining impressive definition even under heavy distortion conditions.

The volume controls clean up the sound as they should, but a tone control would be handy to tame the rather unremitting attack. Like the original Super- Sonic, the layout reverses normal logic, since the nearest knob governs the bridge humbucker. The pickup selector is equally 'upside down' in operation, and when set to the centre position turning either volume off eliminates output entirely, so it can't function as a kill switch.