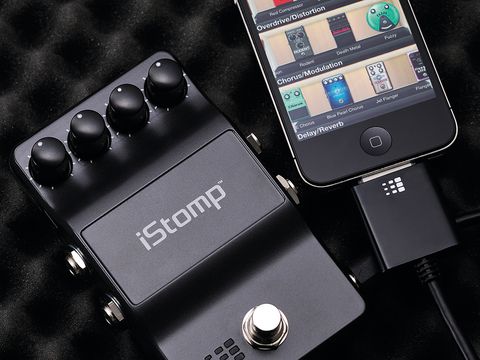 A pedal for all seasons. Add one of these to your rig and you'll always have a use for it.

Digital technology is all around us these days and the one area of equipment in which guitarists most seem to have embraced it is effects processing, with plenty of examples of digital stompboxes being found underfoot.

With digital, in theory, as long as a pedal has the necessary onboard processing capability, it can be programmed to create any sound and become any pedal you want. This is exactly the thinking behind the iStomp - it's an infinitely reconfigurable pedal, a blank canvas to be painted on over and over again.

"A pedalboard with nothing but iStomps ready to be configured for a particular gig or recording session is an intriguing prospect."

Now, this has been tried before: Line 6 tried it with the ToneCore Programmable Module and TC Electronic, of course, has the TonePrint series, where you can download new variations on a particular pedal's effect type. However, while the concept of a programmable single pedal is not a new one, DigiTech's execution of the concept is.

The deal with the iStomp is that it can become any pedal that you want it to be by loading the data for that pedal into it from your iOS device, so it can be changed from a fuzz box to a chorus, a delay, a reverb, or whatever else is available via a free app called Stomp Shop.

In Stomp Shop you will find the full range of available pedals displayed by category on the shop's scrolling 'shelves' at the top of the display, while any pedals that you have bought appear in the My Pedals section below.

A tap on any pedal in the Stomp Shop enables you to hear a sample of its sound and, for a more thorough investigation, you can load any pedal into your iStomp to try it out for five minutes (and you can have an unlimited number of these
five-minute trials).

Loading of any pedal from the Stomp Shop into the hardware pedal takes place through the supplied DigiTech Smart Cable (DSC) from your iOS device. It just takes a couple of taps on your iPhone or iPad to commence loading and the process takes about 30 seconds - ably illustrated in an onscreen box.

Should you like any trialled pedal enough to want to buy it, you simply purchase it from the Stomp Shop and it will migrate from the shop shelf into your personal section, always ready to be loaded into your iStomp whenever you want that sound. Once a pedal is loaded into the iStomp it's there until you decide to load a different one and you can reload any pedal to your iStomp at any time.

Nicely compact with a slim low profile, the hardware iStomp's appearance totally reflects its role as a blank canvas. With its gunmetal grey finish and no legending (apart from the white increment markings surrounding the four slim black knobs), never has a pedal looked more anonymous.

You can, however, personalise the pedal and give it a bit of colour with the provided removable stickers - some blank ones and some representing the more generic of the downloadable pedals - that can be applied in the space where the iStomp logo is. You can also choose which colour (from a choice of nine) the iStomp's LED display is for a reminder of what pedal you have loaded in at that time.

The pedal won't run from a battery, but will take a standard 9V DC supply (an adaptor is provided) and both mono operation and stereo output is possible, with some pedals also allowing stereo input.

To get started, the iStomp comes with two complimentary pedals - the Redline Overdrive and the Total Recall, a really useful digital delay. When you first connect to the Stomp Shop you can have your first pedal for 69p, after that the currently available pedals are variously £2.99, £4.99 or £6.99.

In the course of our review we tried out all of the pedals in the Stomp Shop and there's a fine selection, with many based on well-known names, most of which sound excellent and very close to the original sound where we got the chance to do an A/B test.

The DM delay does the BBD analogue thing with aplomb and gave our vintage BOSS DM-2 a run for its money, while the Vintage Tape Delay captures the flavour well, and does it in stereo and with tap tempo if you prefer.

Modulation is well-covered with two flangers, two choruses, two phasers and an opto tremolo. The Flanger Affair doesn't quite capture the metallic timbres of an Electric Mistress, but the CE Chorus is faithful to the BOSS sound.

The various types of dirt (overdrive/fuzz/distortion) are, among others, covered by DigiTech's take on the Tube Screamer, Fuzz Face and Rat respectively. Add in the compressors, envelope filter, octaver and reverbs, and just about all popular effects are covered, with, doubtless, many more to come as new pedals are added to the range.

There's little doubt that the iStomp is a cool concept that sounds great, but is it for you?

There are a couple of issues, the first being that you need an iOS device to use it. Now, while the take-up of iPhones and iPads is increasing all the time, the simple fact is that not everybody has one, which limits the iStomp's appeal and makes us wonder whether a system that supported USB computer connection might be more inclusive.

The good news is that we've checked with DigiTech and it is working on
a desktop version of the Stomp Shop, but anyone hopeful of an Android Stomp Shop will be disappointed, as that has been virtually ruled out due to hardware variety of the legion of Android devices available.

Secondly, at over £150, the pedal is quite expensive, even before you add in the cost of however many individual downloads you wish to add.

A pedalboard with nothing but iStomps ready to be configured for a particular gig or recording session is an intriguing prospect, but for that outlay you could have a bunch of decent quality dedicated pedals. Still, the idea of a 'chameleon' pedal will tempt many - there's definite appeal in having a pedal in your rig that can be whatever you want it to be.

The iStomp is also like having a pedal that can be traded for a different one for very little if you get bored, while being able to go back to the original at any time. For that infinite recyclability, maybe the price isn't too high, and DigiTech should certainly be applauded for pushing the envelope.

If you've always been put off by effects gizmos yet get along fine with your iThing, this one's for you.