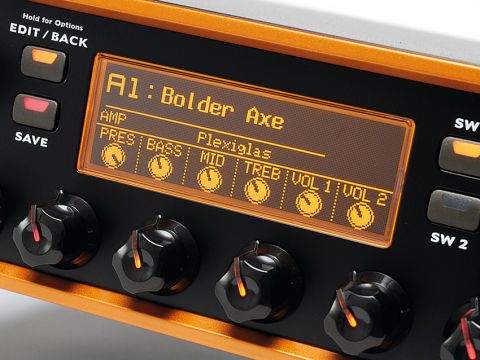 The Eleven Rack really is everything you need for guitar recording in one box. The new standard.

Digidesign - the company behind the industry standard Pro Tools recording software - has had a longer association than most with amp modelling, starting in 1998 with the Line 6 Amp Farm plug-in for Pro Tools TDM systems.

In recent years the company has released its own amp sim software plug-in, Eleven, for Pro Tools. But now it has gone much further and come up with the Eleven Rack, a hardware unit designed to be the guitar player's ideal one-stop solution for use in both live work and recording.

Eleven Rack is an audio and MIDI interface with guitar amp and effects processing built right into it and it can be put to use in several ways. It can be used as a standalone unit without a computer in sight, providing a range of amp and effects sounds and connecting via an array of outputs to recording equipment, PA or amplifier.

It can be used as the front end for Pro Tools - it comes with Pro Tools LE software - with a bunch of special features that integrate hardware and software, both for recording guitar or re-amping previously recorded work, and it can also be used as an audio interface/guitar processor with recording software other than Pro Tools.

As a 2U-high rackmount unit, Eleven Rack has connectivity that ought to take care of any live or studio situation. A mic input with phantom power, pad switch and gain control sits conveniently on the front panel should you wish to record vocals, acoustic guitar or anything else. But the main point of entry for guitarists will be the dedicated guitar input featuring Digidesign's True-Z circuitry, which has been designed to allow more realistic interaction between the guitar and the modelling software.

Digidesign says that this analogue input circuit replicates the input impedance of classic stompbox pedals and guitar amps, so that when you plug in and start to play the modelled stompbox or amp, you get the same response as when plugging in to the real thing.

The actual sounds are stored as separate 'rigs' with a signal chain featuring amp, cab, eight effects (volume, distortion, wah, modulation, FX1, FX2, reverb, delay) and an FX loop to which you can physically add your own pedals (mono or stereo).

The effects and the FX loop can be moved to different locations in the signal chain. Digidesign hasn't included models of every amp and effect under the sun, instead offering a small but meticulously chosen
selection of gear that will cover a very high percentage of theguitar tones you're likely to want to hear.

Classic Fender, Marshall and Vox amps are bolstered by Mesa/Boogie and Soldano models while the effects cover, arguably, the cream or most typical of each genre - Big Muff, Tube Screamer, Rat, Memory Man, Phase 90, Echoplex and so on.

A large display with six associated soft knobs lets you see and adjust everything from the Eleven Rack's front panel - amp controls are the default parameters for adjustment while the effects have individual switches to both make them active and put their parameters into the display for adjustment.

If you have Pro Tools up and running you get a graphical editor for Eleven Rack that makes editing the rigs even easier, with drag and drop functionality for placing effects in the chain.

A set of headphones plugged into Eleven Rack's front panel gets you straight into the action, but there are other options to hear the sounds, with different outputs available to deliver the signal to various destinations - simultaneously if desired.

The whole rig signal can be sent to a PA or mixing desk, but there are also 'output to amp' sockets for use with your own live rig. For these the signal can be sent from a choice of points in the chain, so it would be quite possible to send the whole signal without cabinet simulation to a power amp and speaker set-up, or just use the effects from the Eleven Rack feeding a combo or stack.

For remote switching and control of parameters, Eleven Rack has various possibilities. You can connect an expression pedal or a dual footswitch, but not both at once. This is a shame as it would have been nice to control the wah and be able to turn a distortion effect on/off by foot during the same song. More control, however, is offered via MIDI, so a decent MIDI foot controller will put you in command.

Sonically, the modelled sounds in Eleven Rack are top notch with plenty of the nuances you'd expect from a real amp. Playing through the unit feels dynamically correct, with a realistic response to picking attack and guitar volume. What you get here are authentic sounds that not only stand up in a recording context but translate equally well to a live setting - this is a unit that you could use to record a whole album and then take on the road to recreate those exact sounds onstage.

The preset rigs seem to have been designed to give you plenty that's familiar and easily usable - many rigs are based on a particular artist's tones - but there's loads of flexibility when it comes to creating your own.

You can, of course, use any of the physical outputs for recording, but the USB connection utilising the Eleven Rack as an audio interface seems to be the easiest way to go. What you get are eight sends to the computer and these are set up so that you can record two tracks simultaneously - a full stereo track of the whole rig plus a mono track of the dry guitar sound to give you the option of re-amping later.

This will work with whatever software you use, but with Pro Tools you get another extremely practical feature whereby you can embed the Eleven Rack rig settings within a track, so if you need to go back to re-record part of a track at any time in the future you can recall the exact sound with a single mouse click.

As for re-amping (taking your dry guitar track and applying amp simulation and effects), Eleven Rack makes this as easy as possible either by allowing internal routing of the signal or bypassing the signal through the rig out to an amp and recording the physical sound to the computer through the mic input.

Versatile, easy to use and with quality sounds, Eleven Rack provides an extremely practical single-box system for all aspects of guitar recording, as well as being solid enough for onstage use without any qualms. Digidesign has certainly done its homework and designed something here that's entirely sympathetic to a guitarist's needs.