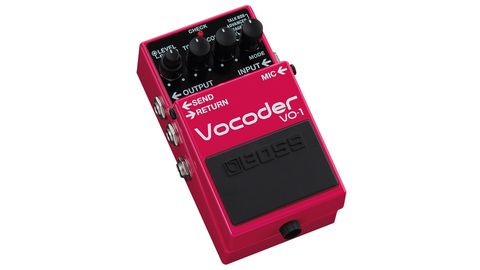 The VO-1 makes the vocoder sound, and that of the Talk Box, easily accessible to every guitarist. Once again, Boss has shown us the way...

Look up a definition of what a vocoder is and you'll learn it's a 'category of voice codec that analyses and synthesises the human voice signal for audio data compression, multiplexing, voice encryption, etc...'

Eh? Look, it makes your voice sound like a robot, okay? Vocoders were used in the Second World War to disguise messages. These days, they're used to add some weirdness to vocal tracks, as heard on Phil Collins' In The Air Tonight, Radio Gaga by Queen and Dr Dre and Tupac's California Love among others. Daft Punk can't get enough of the sound, either.

Two important pieces of information: you need a decent vocal (non-phantom power) microphone to make the VO-1 work; and you don't have to be a good singer to play.

Setting up is easy. Plug your mic into the dedicated XLR socket, your guitar (or bass, keyboard or whatever) into the instrument input, and run a cable to your amp or recording setup, and you're ready to get it on.

You have a choice of four effects. Choir, a guitar synth sound, is the only effect on the VO-1 that you don't need a mic to operate. Vintage is your classic 70s/80s keyboard-based vocoder sound.

Advanced is a modern take on the classic vocoder sound with a touch more clarity. The final destination on the knob is Talk Box. Everyone knows what this sounds like: it powers Richie Sambora's riffs on Bon Jovi's Livin' On A Prayer and It's My Life, and provided the hook for Peter Frampton's old chestnut, Show Me The Way.

Of the rest of the controls we have at our disposal, Colour is the most interesting. In the Vintage and Advanced modes, it adds depth to the sound for a deeper tone; turn it up and the effect becomes increasingly shrill, like squeezing Barry White's nuts until he squeaks like a choirboy, if you'll forgive the mental image.

In Talk Box mode, Colour adds increasing amounts of distortion to the effect. The Vintage and Talk Box modes are the pick of the litter here. The former works great for adding extra expression to bottom-string riffs and lead runs. It's a bit like a super-duper wah pedal where you can accent certain notes just by talking or singing into the mic.

Fear not, if your singing voice blows; its the signal from your guitar that keeps the pitch correct. The Talk Box mode isn't quite as throaty-sounding as the iconic Heil HT-1 unit that established the effect in the first place, but the VO-1 is easier to setup and use, and you don't need the teeth-rattling plastic mouth tube that Richie had to contend with - it's all done via the mic.

Some will dismiss a vocoder as a novelty robot voice simulator, but it's actually a hugely expressive, and addictive, effect.