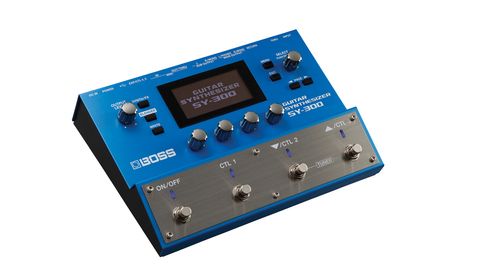 For guitarists seeking to occupy keyboard ground, soundtrack artistes looking for an immediately accessible sonic palette or anyone interested in expanding the sonic scope of their instrument, the Boss SY-300 marks a giant leap forward for guitar-synth kind.

We admit it: guitar synths have never been exactly... cool. They've had their moments, but for many of us, seeing someone play a guitar only to produce a flatulent horn impersonation from the PA speakers is hardly cause for admiration.

What's more, they've long been hindered by the requirement of fitting either a MIDI or divided pickup to your guitar - itself a royal pain in the arse. Well, brush your preconceptions aside and throw that beginner's guide to MIDI in the bin: the SY-300 is here to revolutionise the guitar synth.

Thanks to its polyphonic tech, the SY-300 doesn't require a special pickup of any kind, and works with any electric guitar you care to name. At its core, it's packing three oscillators, which produce sound dependent on their shape - sine, saw and square wave, for example.

Combine three at once, and you can imagine the colossal potential for tone-mangling. Each of these oscillators is then routed through a multi-effects board's worth of effects - you get a whopping 21 types on board the SY-300 to further manipulate the sound.

As you might have guessed, there's some deep menu-based editing to be done here, but fortunately, Boss has made it easy for us guitar luddites. Hitting the synth/FX button takes you into your signal chain - which will look fairly familiar to anyone who's used a Boss GT-100, Line 6 POD HD or similar - where you can tweak your oscillators, effects and signal routing.

Admittedly, the depth on offer can be daunting, but a bit of trial and error sees you right: start with the waveform, pitch and envelope controls, then you can get onto the fun stuff like the 16-step sequencer, which syncs up to the BPM you program into each patch.

Suffice to say, the SY-300 isn't exactly plug-in-and-play, but there are a few quick and easy entry points. The factory presets give a good overview of what you can summon from the pedal; they're hardly subtle, but there are some almighty organs, dub wobbles and eerie bell-like tones to be had. Our favourite feature, however, is the blender function.

This allows you to pair oscillator settings from one patch with two others and - even better - features a randomise setting: hit the select knob, and 'GO!!' flashes up on the screen, slowly shuffling the oscillators until you find a tone that's worth saving. Write it to the memory, and boom: you have a new sound, without faffing around in menus.

Crucially, the SY-300 sounds fantastic. Tracking is practically infallible, and latency is minimal. Flute-y pitch glides, wub-wub dubstep bass and impossibly 80s dance synths are all here to play with, and it's easy to dial in massive distorted square- and saw-wave sounds such as Dizzee Rascal's Bonkers or Wiley's Wearing My Rolex, which work well in a rock context for Nine Inch Nails-style dance crossovers, too.

Add in the flexible overdrives and distortions, plus delays and reverbs, and you have the recipe for some seriously foreboding tones... and some outrageously cheesy ones, too. Remember: with great power comes great responsibility.

There's flexibility galore elsewhere, too: the pedal's layer function allows you to assign certain oscillators to specific note regions, so you could stick a sine- wave synth on your lowest notes, and a sequencer on top. You can also set the oscillator to run just the input signal, so there's always the option of employing the SY-300 as a standalone guitar multi-effects for a patch or two. And thanks to Boss's Tone Studio software, you can edit and store patches on your computer, plus download sounds from the user-generated database.

Despite being around for almost 40 years, guitar synths still won't appeal to conservative players, but we reckon the sheer convenience of the SY-300 is going to win it a far larger audience than any past processors.