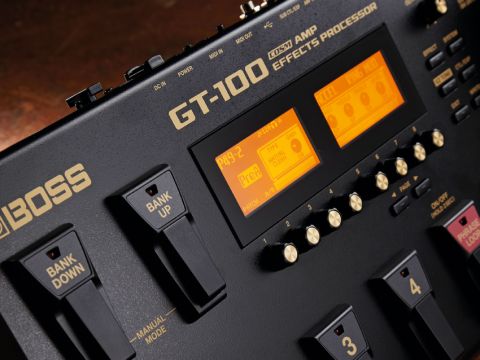 The GT-100 continues the lineage of this series with sonic and ergonomic advances that make it a powerful tool for both recording and live use.

The GT series has been the flagship guitar processor in the BOSS product line for some time now and gets a serious revamp every few years with a new model.

The latest is the GT-100 - the successor to the four-year-old GT-10. This time around BOSS is using a new DSP (digital signal processing) engine and has completely remodelled all of the COSM amps for the GT-100. The effects have been updated with enhanced real-time control options including the all-new ACCEL pedal, which can adjust multiple effects parameters in real time.

Ease of use is another area BOSS has addressed with gusto - there's a completely redesigned user interface for this new model, featuring, for the first time, dual displays with associated knobs for quick parameter adjustment.

The GT-100 is a multi-effects processor with 400 patches onboard, 200 of which are factory presets, with the rest available to save your own creations. Patches are stored four to a bank and all are constructed from a chain of effects blocks that can be placed in any order.

The blocks include compressor, overdrive/distortion, preamp (amp simulation), EQ, FX1 and FX2 (both can host a variety of effects types), delay, chorus, reverb and expression pedal FX. You can also connect your external effects to the GT-100's send and return loop for extra flexibility and include the loop's assignment aspart of a patch.

Each patch can have two channels, each with different amps and effects assigned. These can be combined or you can switch between them with a footswitch or automatically via the notes you choose to play and how hard you play them; a feature called A/B Channel Divide divides the signal not only by dynamics, but by frequency as well.

In addition to the sound creation and control features, the GT-100 sports a looper with 38 seconds of mono looping (19 seconds in stereo) and can function as an audio interface to your computer that can be used for recording dry or effected guitar from the GT-100, or sending previously recorded dry sounds to it for reamping.

The slick black GT-100 is made of solid metal and sits squarely on the floor/stage on four robust rubber feet. Eight footswitches and a treadle control the action.

While you could simply operate the GT-100 by changing patches at appropriate points in each song, there's an alternative manual mode, entered by pressing both bank switches simultaneously. In this mode the GT-100 can function just like a conventional pedalboard with the switches being instantly assigned to individual on/off switching of the effects in whatever patch is selected.

In this way, each patch can give you a different array of 'pedals' for your pedalboard - up to eight stompboxes and a pedal effect. You could easily choose adifferent set of effects onstage between songs, or even during a song, with some deft footwork on the bank buttons.

Setting up and storing your own patches/pedalboard configurations before playing is obviously the way to go and BOSS has really made that a simple process here. The remarkable thing is that there are no conventional menus to wade through - everything is on the surface and on display.

Each of the two displays has four soft knobs beneath it to edit whichever parameter is graphically on show. Several pages of parameters can be easily brought into the display windows by using a pair of page buttons below the knobs.

Instead of getting straight in and tweaking individual parameters, you can also paint your sound using broader strokes. The EZ Tone function enables you to choose a basic musical style and tailor it by moving a cursor in a graphical grid. The associated amp customise and OD/DS customise functions do the same for amp type and overdrive/distortion type.

Each of the blocks in the signal chain can have a variety of different modelled sounds loaded into it.

There are 26 amp simulations including Fender, Marshall and other well-known brands/models, while the overdrive/distortion block has 22 options including emulations of a Rat, Big Muff, Fuzz Face and Tube Screamer. The two FX blocks have access to 32 different effects including plenty of modulation, pitch shifting and filter options.

The upshot of all these options, combined with the mass of available editing opportunities, is that the GT-100 is capable of a very wide range of tones as evidenced by the factory presets, which run from meat and potatoes amp simulation right through to esoteric effects that show the full sonic capabilities of the unit. There are some very inspiring sounds among the presets that will make you want to play as well as providing massive potential for creating your own tones.

In terms of playability, the COSM amp simulations do seem nicely responsive to touch, doubtless benefiting from the increase in DSP power, and, underfoot, you get arange of options to enhance performance. The heavy-duty expression pedal facilitates control over volume and can also offer wah or Whammy-style pitch bending.

In addition, although the ACCEL pedal is capable of a range of off-the-wall spot effects including feedback and ring modulation, it can also be assigned as a control pedal to a patch parameter and is extremely useful designated as a simple boost or as a switcher between channels A and B if you are using a patch with two channels. It can also be assigned as a tap-tempo switch and, if you need even more control there's the option of adding an external expression pedal and footswitches.

The Phrase Loop pedal offers simple record/play/overdub control of the looper, which, while rudimentary, offers a useful facility, particularly for practice.

The GT-100 advances the abilities and practicalities of the GT series while also being a lot easier to set up and use than its forebears. It's a great resource of tones for recording, utilising a full range of amp and effect sounds and it's also a very practical onstage unit.

You might not want to use the amp sims in a live situation but there are myriad effects on tap, particularly in manual mode, which instantly transforms the unit from a patch-based multi-effects unit to effectively being a pedalboard full of individual stompboxes.

With eight stomps (or seven and a tuner) and a wah/volume pedal, the BOSS GT-100 could be all you need between your guitar and amp.