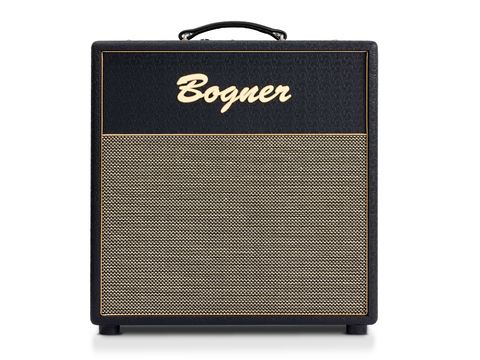 The Barcelona is a great example of a perfect niche-market amp - audition it.

Reinhold Bogner is one of a handful of elite amp designers who has profoundly influenced the electric guitar's sonic development during the last three decades.

From his early work with Van Halen and Steve Vai, which led to the original monster three-channel Ecstasy heads, Bogner amps have always been lauded for their tone and build quality. A recent tie-up with Line 6 produced the Alchemist range while Bogner continues to develop his own hand-made products at his Hollywood base.

The Barcelona's 1 x 12 cabinet is slightly more conventional than the Goldfinger 45 head we've also tested recently, with a top-mounted chassis and two oval control panel cutouts. This is a hefty box for a 1 x 12, with most of the weight in the woodwork and the large ceramic magnet of the Celestion Vintage 30 loudspeaker - the chassis is lightweight gold-anodised aluminium.

The Barcelona's fairly simple design uses just one board, which holds the valve bases but not the switches and pots - these are connected by flying leads. It shares the Goldfinger's quality in the electronics department, with double thickness circuit boards and heavier than normal copper plating. As you'd expect, all the components are of the highest quality, giving a look and feel more often found on top-dollar hi-fi products than guitar amps.

The Barcelona is a simple single-channel design, with controls for volume, gain, bass and treble, a three-way toggle switch to alter mid-range response and a pull fat switch (to lift gain and add more zing at bedroom levels) on the gain control. It's intended as a clean, high-headroom amp for players who achieve their tone via pedals.

The cool thing about the Barcelona is that it uses a pair of 6CA7 output valves, Americanised and generally interchangeable versions of the EL34, said to sound roughly halfway between an EL34 and a 6L6 - the valve Eddie Van Halen is supposed to have used on his 'Plexi' heads. It also has the same bulletproof build quality and Bogner mojo as the Goldfinger, and should easily stand up to the demands of pro-level touring.

The Barcelona produces very little mains hum and just a tiny background hiss when powered up. It has plenty of headroom to cope with pretty much any overdrive or distortion effect you might care to use.

We really like this amp's thick woody clean tone, with enough flexibility from the three-way mid switch to do decent tweed and blackface tones too. Digital and analogue effects sound equally good through its deceptively simple circuit: we tried out a TC Nova System and an old Pro-Co Rat with a BOSS CE-1 and despite the difference in complexity and cost, both set-ups produced some excellent sounds.

The Barcelona is built to rigorously high standards and is capable of stunning tone when dialled in. And by Bogner standards it actually represents good to very good value for money, despite serious competition.

Ultimately it's a specialised tool aimed at effects users. You'll find other models in the International range aimed at other niches - we'd definitely advise checking them out.