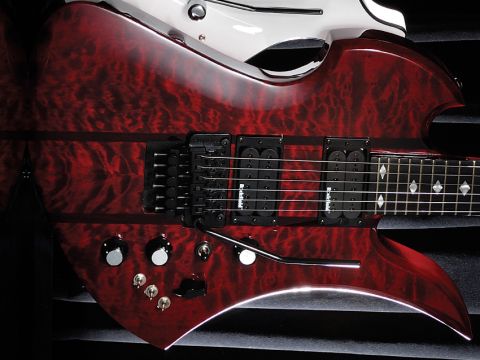 Get this 'bird in your hand

On the odd occasion when Slash is removed from his Les Paul, he grabs a BC Rich Mockingbird with more dials and switches than a recording desk.

Let's get this out of the way first the Mockingbird isn't exactly a conventionally pretty guitar. But love it or hate it, BC Rich reckons the ST pays you back with its smart-arse features.

There's certainly plenty to take in on the spec, with the website proclaiming the through-neck, twin Rockfield Mafia pickups and genuine Floyd Rose, all built on the foundations of a nato body with a maple top.

All good stuff then, but we're more interested in the buttons. Alongside two volumes and a tone, you've got a varitone (with five preset tones), plus switches that tap the Mafias and bring in the reverse phase mode.

Despite the 24 frets and Floyd Rose, the ST feels more like a rock guitar than a shred machine - and that doubtless has much to do with the beefcake body and chunky neck. To our fingers, it didn't play quite as fast as its rivals, but if you want to be Slash instead of Vai, that should suit you perfectly.

Plug in and the right kind of guitarist will find plenty to froth over here, with the thick roar of those Mafias hitting you like a knuckle-duster, hours of fun to be had from the switches and the looks prompting some ambiguous 'where did you get that?' looks.