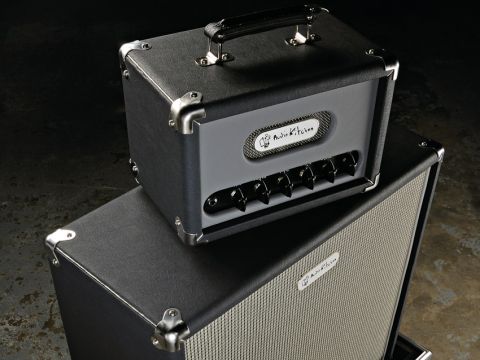 A huge range of tones and textures, but you really need to work it to find them. Rewards decent guitars and guitarists.

Audio Kitchen is a new UK amp brand, headed up by one Steve Crow, and birthed of pro-audio firm Mutronics, where Crow has worked since 1999.

Like all the best stories, getting into building amps was something of a happy accident, as he explains: "A good friend and I spent loads of time at the end of the nineties, trying different amps and rapidly realising what a difference there was between the top-flight amps, and more standard production amps. We couldn't justify the expenditure of the ones we really loved, but it sewed a seed.

"In 2000 I was chatting to a session player friend," continues Crow, "who had an AC30 that he loved, but was frustrated that it was impossible to record the overdriven sounds at home. I said I'd have a think. Then I bought 12 old valve radios for £12 from eBay and turned them into guitar amps.

"Before I knew it, the great-grandaddy of the Little Chopper was born. I just wanted to make an amp for myself and a couple of friends so we could pursue music with a new tool, but it didn't really work out like that.

"More people wanted them and then James [Dunbar, Mutronics technical director] asked if I wanted to make it a Mutronics-funded operation. When you're given the opportunity to turn your hobby into a full-time job, it's hard to say no!"

Let's get the oohs and ahhs out of the way. Yes, it's cute - about the size of 12 cans of beer, and every bit as intoxicating, with fastidiously wrapped blue and grey leatherette vinyl and mesh grilles so you can catch a glimpse of the glowing glass within.

Crow should be praised on his graphics too - a sort of semi-haphazard hand-drawn typeface (a tenner says he's left-handed), which is then etched into the control panel to form the legends. Very tidy.

The first control is gain, which regulates the two preamp valves - an ECC81/12AT7 and a ECC83/ 12AX7 and the lone EL84 in the power section should be noted. Then there's bottom (bass), middle and top (treble). After that, it all gets a bit more involved, which explains why so many recording guitarists are falling for the Little Chopper.

First is 'stack': this is a two-position switch that, in the left position, enables the EQ pots to work normally, dialling in bass, middle and treble, even if to our ears, the top control's range is somewhat limited compared with what you'd expect from a 'normal' treble control.

That said, who actually uses their treble pot either off or at maximum anyway? Switching the stack pot right disables the normal function of bottom, middle and top pots, and in Crow's words, "Repurposes the top as a high-end roll-off". All the way anti-clockwise takes out a slab of presence-type high-end, with the range of the pot seemingly all happening in the first third of its travel.

The final control, power, might be a little perplexing if you haven't read the instructions. It's not a master volume, but a headroom control for the seven-watt, single-ended power section. So, fully anti-clockwise is maximum squash for the power amp, and fully clockwise the power section is wide open, leaving everything to the gain control.

There's even an EZ81 (6CA4) valve rectifier, though according to Crow (and to dispel a popular misconception concerning class A amps) the power amp sag and compression comes almost entirely from the EL84.

Why did Crow choose that power valve? "Subjectively," he begins, "it was the valve that sounded best when scaling the anode voltage down. It's a grand old British design which receives constant bashing, but I like it!"

Inside, the Little Chopper uses quality components, hard wired around a simple turret board design. Crow has used some big polypropylene caps alongside the more usual electrolytics. Strict vintage this ain't: it's an old-school approach, but with a bit of esoteric hi-fi thrown in.

The result of all of the above is a highly interactive amplifier that takes a little while to get to know, but when you do, delivers a wildly diverse and almost endlessly surprising set of sounds.

You soon realise that a conventional approach isn't much use with the Little Chopper. The gain and power controls are so fundamentally interactive that it's simply not a case of setting one low and the other high for clean or dirty tones as you would be in a 'normal' amp.

The first thing to note is that at anything other than relatively low recording levels, there's not a great deal of clean headroom. That's not to say there aren't some rewarding clean sounds, though.

With the power control past three o'clock, the gain just over half and the stack set to the left, Fender single-coils return a chimey clean that's rich in the bottom and top.

The mids are slightly scooped - the left position on the stack control is EQ'd for that - and if you work the guitar's volume control, the highly sensitive front end breathes life into open-position chords especially. Maxing out the guitar's volume and digging in with your pick gives the edges some grit.

Leaving the master where it is, pushing the gain increases volume significantly and adds more preamp distortion to the mix. With humbuckers, it's not long before you're into full-on distortion territory, yet there's always a brash edge to the drive that won't please the Santana fans out there.

This is more akin to the edgier tones of EL84-driven Voxes, Fenders and some Marshalls, although trying to pin it to a classic is futile. As Crow says: "Vox-inspired sounds were what I was hankering after. It's moved away from that a bit, but there are still those chimey chord sounds and fast, immediate string dynamics in the mix." We'd agree.

It's fun to experiment with lower settings on the power knob, as the squash and dynamics of the output section really come into play. This hits melt-down territory when you flick the stack pot to the right.

There's an apparent gain and mid boost which, with humbuckers, can become really fuzzy in a kind of Billy Gibbons way. With loads of power amp squash, it's sort of like switching in a compressor, such is the bloom of notes as they ring out - urges to play wigged-out Neil Young solos are only to be expected.

High-power, slamming metal gain sounds aren't found here, and neither are super strong, strident cleans - anyone expecting to get that from a lone EL84 power valve needs a reality check.

However, that the Little Chopper can go from pretty clean to relatively filthy in just one channel is impressive. That it does this while filling in all the gaps in such an enjoyable way is surprising, even if it does take plenty of experimentation and head-scratching to decipher exactly how to eke out all the sounds.

Unconventional it may well be, but it's easy to understand why many professional recording guitarists, engineers and producers have taken to the Little Chopper. The relationship between gain and headroom feels unusually tweakable, without the need for multiple channels or digital tomfoolery - a lower-gain input option would have made it even better.

As for price, you'll have to really love the Little Chopper to choose it over, say, a Matamp First Lady, or even an Orange Tiny Terror for that matter, even though its tone and response are unique.

But when looking at price, consider that Steve Crow makes every amp pretty much by himself, in the UK, using top-drawer components. His economies of scale and laborious build process mean a high price. The payoff is a rare, thoroughly professional amplifier, that any serious recording guitarist or studio deserves to hear.