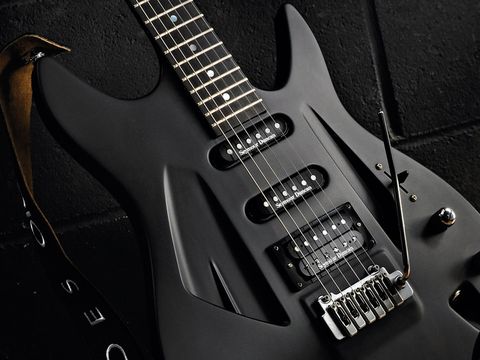 A very competent guitar with rock-ready tones and a modern image. It faces stiff competition from more familiar and conventional boutique brands.

Aristides is new name in the guitar world - the OIO (oh-one-oh) was first introduced in 2009 and only shipped in early 2010. Yet they've grabbed our attention by using synthetic material for their necks and bodies.

Aristides uses Arium - a material conceived to offer a consistent alternative to good old wood. The Aristides' body and (graphite reinforced) neck are "made out of Arium, moulded in a hard outer shell," explains the company's Chris Dekker.

"Arium consists of glass pearls and natural resins only, so the material is environmentally friendly. The last thing is a very good side effect, and of course it's good we don't need any scarce woods."

Aristides Poort began the development of what was to become Arium 15 years ago at the Technical University of Delft, in the Netherlands.

"The idea was to make the perfect tone material," explains Dekker. "Our guitar is one-piece, with no bolts or glued joints and no dead spots. All our guitars sound very similar, but we can experiment with the composition a bit: the bass, for example, is made from a slightly warmer sounding composition of the glass pearls and resins."

This hi-techery aside, the guitar is quite conventional in terms of pickups, hardware and function.

The OIO is a larger-bodied guitar, approximately 35cm across its lower bouts and 46cm from the tip of its upper horn to the instrument's base. Its body and neck are a one-piece die-cast moulding, with the neck joint beautifully chamfered away to create a heel-less transition from neck to body.

It's not fully solid either - there's a large cavity for the vibrato and its springs, then two further cavities either side: one housing the controls, the other empty. They're covered by a large plate, held in place with eight crosshead screws. The top is lightly arched, but also features some angular, modernist shaping.

In depth we have 20.67mm at the first, 22.33mm at the 12th and a slightly fuller shouldered neck profile though still perfectly mainstream. The nut is again angled to improve intonation; truss rod access is easy via an open hole on the back angled headstock, we have six-in-a-line tuner layout and straight string pull over the nut.

You certainly can't fault the hardware - Sperzel locking tuners and Wilkinson's VS100 vibrato - nor the pickup layout of a Seymour Duncan Custom Trembucker at bridge and two Alnico II Pro single-coils, the middle reverse-wound with reverse polarity to ensure humcancelling in the mixed positions.

The controls are standard, with a master volume (with pull/push coil-split for the humbucker, which voices the screw coil) and tone, plus a five-way pickup selector.

The flatter radius, the bigger frets and a rather sharp edge to the fingerboard all give the OIO a very distinct character.

Using a USA James Tyler Variax as reference, the OIO presents quite a different sonic character: the OIO has a 'flatter' tonality, as if we've EQ'd the Tyler to bring down the highs and upper mid-range and enhanced the lower mids.

There's no shortage of sustain and the guitar sounds very even across its entire range. So, through a clean Fenderstyle amp we hear a noticeable roundness in the ultra high-end and certainly, as you'd expect, from the bridge humbucker.

The single-coils have more cut but the Arium platform is definitely playing its part. Even unplugged the OIO has little acoustic ring and seems muted - not dramatically, but it's noticeable.

Running into a higher gain amp the OIO sounds big, juicy and tough with that Duncan Custom providing additional output and thicker mids. In this higher gain arena the guitar seems a little more microphonic, but we're having fun.

There's an evenness and almost slightly compressed nature to the tone too - the OIO seems at home with gained rock sounds. Again, comparing it against the Tyler it lacks some of that guitar's higher-end snap, but does provide an almost Les Paul-like girth.

The vibrato performance is excellent and there's no denying that although different to a high-quality bolt-on double-cut, the OIO and its Arium platform definitely works.

Whatever they bring to the tone table, most synthetic or alternative material guitars - historically - have faced a stiff challenge from good ol' wooden axes. A major reason has been price, and Aristides instruments aren't cheap. This issue is clearly compounded in these dour economic times.

Judged on our two review sample, this guitar sound different to similar wooden guitars we compared it with - not necessarily in a bad way, but different nonetheless - yet difference isn't what us guitar players necessarily want.

At the moment Aristides has no solid UK distribution (though they claim that will change as 2011 progresses), which again impairs their potential progress - you really do need to play it.

Despite all these buts we can't help applauding the technical endeavour that's gone into the design and construction of this instrument: this is an extremely viable guitar with plenty to offer the discerning player who wants or needs to augment their collection.