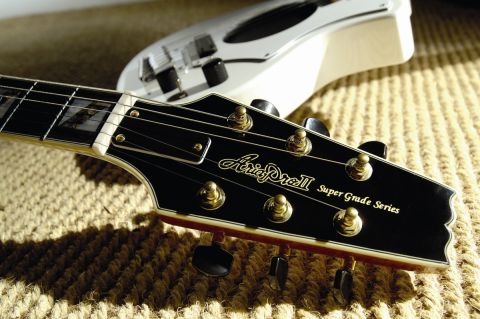 The PE-Inspire is the right price and the right quality to make it a real alternative for those looking for something beyond a traditional LP. Highly recommended.

If classic models bearing the Gibson or Epiphone logo fail to float your boat, Aria has always been a brand worth considering.

But often, models in the same quality brackets as a Les Paul Standard have actually been more expensive than their American rivals.

For example, the PE-Extreme is a lovely guitar but, at £2,100, who's going to choose it over either a classic Gibson or PRS Singlecut? And don't even mention the resale value…

But the PE-Inspire is Aria's attempt to solve this rather baffling problem and make Aria a more appealing alternative.

Nestling right at the heart of the 'I could afford that' price bracket, it features many options that make ultra high-end Arias so appealing, without the monetary investment required.

The body shape will always represent an agreeable change from the Les Paul, more streamlined and accessible than Gibson's powerhouse.

But even though it's both thinner and narrower, a decently sized acoustic chamber is included in the design to head off accusations of an equally scrawny tone at the pass.

An attractive grade of bookmatched flame maple makes up a cap that's carved into a shallow arch that flattens off to provide an even surface for both pickups and the bridge/tail array.

Another feature of high-end Arias, the heel-less neck joint, is included here and we have to say that the workmanship in this area of the mahogany body is faultless.

Although the heel-less design doesn't quite allow as much fretted freedom as some will want, it's an appropriate compromise and there's no doubt that it surpasses a standard block heel.

The neck and rosewood fingerboard, the latter adequately bound in ivoroid and black, offer a modern wide-yet-thin feel that would certainly suit rock players.

With a low action and strung out of the box with a set of .009-.042s, a gauge that can get a little overly floppy on guitars with this 25-inch scale, proceedings are comfortable in the extreme.

If, like us, you like your guitars to fight back a little more, we found that upping the strings to a set of standard .010-.046s did the trick.

We applaud the increasing appearance of top-end pickups on guitars such as this, and here Aria has gone for a pair of zebra-coiled Seymour Duncan humbuckers.

Specifically it features an SH-14 Custom 5 in the bridge alongside the awesome SH-1 '59 humbucker at the neck.

The company has clearly done its research, as the pairing of these two is recommended by Duncan for obtaining those vintage PAF tones without having to shell out for a 50s Les Paul.

Controls are stripped down to basic single volume and tone pots plus a standard three-way toggle - all three are subtly recessed into the guitar's top.

Aria's own brand of tune-o-matic bridge and stop tail, plus a sextet of Gotoh tuners and a Switchcraft jack, round off a cool looking and nice playing instrument.

With the right amp it's difficult to approach a single-cut mahogany/maple guitar without fluttering excitement and the PE-Inspire is reassuringly inspirational.

It's not as heavy as a Les Paul, something that'll certainly appeal to many players.

The combination of the pickups, the tonewoods and the acoustic pocket all adds up to a phenomenal tone, of which comparisons to Nashville solids of yore are thoroughly justified.

The bridge pickup is tight and focused without being harsh and, when used with a low-powered all-tube amp, all manner of rock tones are easily attained.

Naturally the neck position is mellower but there's still plenty of bite should it be needed and, when clean, the tone is the perfect combination of forthright aggression and dulcet sweetness.

In a nutshell, this can cover pretty much each tonal base made famous by the plethora of Les Paul users over the years.

The only obvious compromise is the lack of dedicated controls for each pickup but, when things sound this good, we're not too concerned.

The PE-Inspire comes with a price that allows us to finally heap unconditional praise on to a high-end Aria PE.

With a good spec and a fantastic tonal performance, it will have no trouble living up to its name.