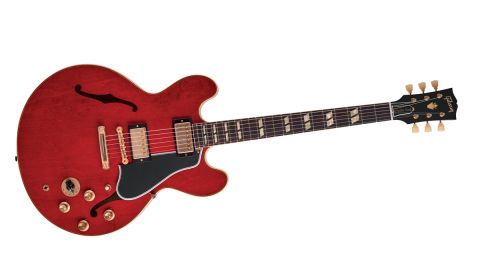 To put it bluntly, if you like old-style Gibsons but can’t afford them, or you don’t want to put up with any issues, Memphis is the place to look.

The Freddie King 1960 ES-345 is based on the hugely influential bluesman’s own guitar and is a limited run of 200 pieces - there no options. While it’s hard to second guess the price-points and style of Gibson’s often forward-looking USA production range, the Memphis division output has never failed to impress us with an eye firmly on the past.

Yet this guitar is not just about replicating the past: along with new design, Memphis is surprisingly cutting-edge, too, employing ‘thermally engineered’ woods - aka torrefication, a process for ‘ageing’ woods and a growing trend for both acoustic and electric makers. –

Earlier this year, division head Mike Voltz indicated Memphis’s plans to use more of the same, suggesting torrefied mahogany for necks, for example, once the production process has been sorted, due to the more brittle nature of the timber after its heat treatment. Ironically, this modernism is being used to try to nail more closely the weights and sonic response of older vintage pieces.

Gibson’s certainly created a more vintage-like appearance with its VOS treatment where both the nitro-cellulose gloss finish is cut back to a lower-gloss lustre and hardware is aged - not distressed - to match. It’s not meant to fool anyone into thinking this is a real old guitar, but it certainly doesn’t look like those box-fresh ‘don’t touch me’ high-gloss pieces, either.

Construction-wise, the King uses a maple centre block with spruce ‘bracing’ above and below to match the domed top and back plates. One unwelcome trait was that the neck pickup wasn’t working when we went to plug in. Then we noticed, buried in Gibson’s spec, a stereo jack socket, which means we have a historically accurate stereo output, unlike the last ES-345 we tested. Obviously, we have a Varitone, too, but again, oddly, this isn’t mentioned in Gibson’s spec either.

With their big 16-inch-wide bodies and that substantial centre block, contemporary guitars based on the ES-335 platform can be weighty, but the King, while substantial, comes in at a classic solidbody weight.

Strapped on, the ES-345 feels like home. It also feels like an old guitar that has been played.

If you’re not familiar with a stereo guitar such as the King, then be warned: it really isn’t for everyone. It really needs two amps to maximise its potential for a start - one for the neck pickup, the other for the bridge.

But if a thinline semi such as this isn’t versatile enough, this stereo setup kicks us into a different league. For example, run the neck pickup into a clean jazz/blues combo and add a little hair or grit to something Vox-y for the bridge pickup.

There are all manner of setups you can consider, and in centre position (both pickups on) it’s like running two guitars in one with none of the interaction you get on a mono guitar in the same pickup position. Summing the outputs into mono (passive), things can get a little weird, but we used a passive Taylor ABY box (in reverse) and that worked fine, but TheGigRig’s Three2One box proved superb to sum both outputs via their own true bypass channels or via a level-adjustable preamp. Another option is Yamaha’s THR Dual head, which again really maximises the fun.

Then we have the Varitone with its scooped voices that get progressively ‘odder’ as you move from position one (bypass) through to six. That said, for those BB or Freddie tones, well, you’ll hear them here and adding some grit and crunch produces numerous tonal shades that might not be your number one sound but have plenty of appeal, not least for overdubs or working with another player.

‘Character’ is the keyword here and this guitar has it in spades. It’s not just the VOS treatment, but the sounds and feel create instruments that take us back in time.