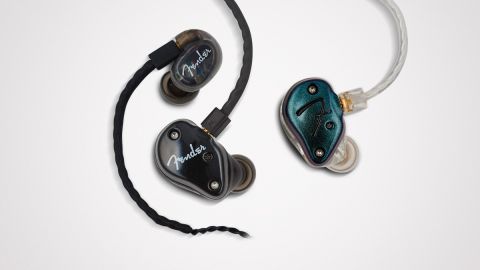 We applaud the fact that Fender hasn’t entered the market exclusively at the top-end. We’d imagine that many drummers would plump for a set toward the middle of the range, however, even the slightly reduced frequency response of the DXA1 is more than comfortable for long periods of time.

It’s not uncommon for gigging drummers to think in great detail about every element of their sound - from big choices, such as drum size and cymbal types through to more subtle aspects like small tuning changes or dampening.

There is one big part of our sound we often overlook though; the one we hear ourselves. Monitoring ourselves and the rest of the band can have a big impact on our overall performance, yet playing gigs with limited PA systems will mean that drummers (despite being physically the furthest from the main PA speakers) often go without.

When monitors are provided, they’re positioned to one side of the kit as a wedge or side fill blasting towards your ears and adding to both the on-stage noise levels and risk of feedback. If all this sounds familiar, in-ear monitors could be your solution.

Often misunderstood, there’s a bit of a fear around in-ears: Does it mean setting up a wireless system? Will I feel isolated on stage? What about connections? Aren’t they expensive? These are all questions that potentially put people off, but the truth is that in-ears are as simple as using a wedge monitor, with many benefits.

Since acquiring Nashville-based custom in-ear monitor brand Aurisonics in 2016, guitar giant Fender has delivered a (currently) seven- strong range of in-ear monitors that covers every price point. Starting at £78 for the distinctly earbud-like CXA1, and culminating in the flagship FXA9 (£1,109), we’re ready to listen...

Both series feature reinforced, detachable cables, multiple tips for different ears and a carrying case, however the DXA1 (currently the only product in its series) also uses a different build process to its pricier siblings. Whereas many companies offer a custom moulded fit, Fender has chosen to create a mean average of the population’s lugholes by 3D-printing the casing for the FX series after sampling ‘thousands’ of ears. This, combined with the included silicone tips creates a seal that Fender reckons will deliver a custom-like experience for 95 per cent of people.

Regardless of the model you choose, these monitors are just that - monitors. No beltpack is included (although Fender has just added the HP2 beltpack headphone amp to its catalogue, available as a bundle with the DXA1 and FX2 models).

In order to hear anything, you’ll need to send a signal from your PA to a headphone amp, mixer, or anything else capable of routing a line level signal to a headphone output. From here, it’s as easy as wearing headphones.

Each set of monitors fit to the shape of your ear nicely, lining up the shape of the body helping it to sit snugly. The cable is formable, so you can bend it into shape to hook around the top of your ear to increase security, and it turns with the earpiece, so as you fit the monitors, you don’t feel like you’re damaging anything.

Starting with the single-drive DXA1, we were worried that it would essentially feel like using music-listening buds, but that is not the case. The fit feels secure, and while the seal doesn’t feel quite as tight as the higher-end FX models, it’s still impressive.

Ambient noise is certainly dipped significantly, so you aren’t battling over the noise of a band to hear what you need to. The FX series with their ‘average ear’ design are unsurprisingly another step up with even greater ambience reduction.

Tonally, there isn’t much to shock here: the further up the range you go, the better the sonics become. The DX1As have a rather mid-heavy sound: less treble clarity coming through from vocals and cymbals, less power from toms and kick. The FXA6s give a good balance, clear with more detail in the higher frequencies and a slightly-improved bass response, while plugging in the FXA9s was a bit like having your ears syringed!

The overall level of detail ramps up, with a perceived increase in output and clarity all round. At over 10 times the price of the DXA1s, though, this is to be expected. But there will be a point of diminishing returns for most jobbing drummers.

Are they 10 times better? Quite possibly, but it is worth noting that with all of these models, that improvement is not in the form of earth-shattering bass. You’ll still be reliant on the on-stage amps, main PA system or possibly your Porter & Davies to provide the thump that you feel, as with any in-ear monitoring system.

We tested the FXA6s at a gig, and the results were fantastic: a decent seal meant that fatiguing on-stage noise was blocked out, yet the overall mix was maintained. A common concern is the feeling of being isolated from the rest of the band and audience, however, in our experience there is often just enough background ‘bustle’ coming through vocal and instrument mics to remain connected while playing.