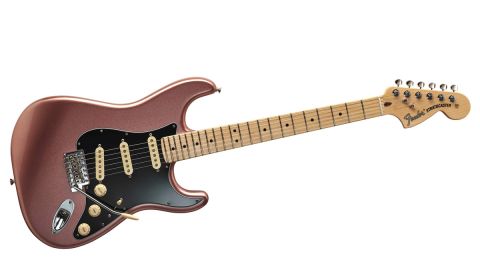 Yes, it's another Strat, but this USA-built offering has the playability and extra tonal options to make it worth the additional outlay over its Mexican-built rivals.

Back when we reviewed mid-priced Fender’s Player Series, we charted the aspirational line of Fender progression: you start on a Squier, gig with a Mexican-made model and go pro with an American-built guitar.

The newly launched American Performer Series represents the most affordable entry point to bona fide USA Fenders, and marks the Big F’s first refresh at this price point in over 10 years.

On first glance, there’s not much new here, but then Fender has never been one to gamble with the aesthetics it got right in the first place. You will, however notice that the Stratocaster we’re looking at here comes in the all-new Penny finish – it won’t be to everyone’s tastes, but paired with the black scratchplate, we reckon it has its own funky swag.

The big changes lie in the all-new pickups that come fitted to all models in the range: Yosemite single coils and DoubleTap humbuckers, and the associated electronics. Many of the models have their own push-pull tone pot to eke additional sounds from a familiar format. On humbucker-equipped electrics, that usually amounts to a coil-split, but on the Strat we have here, the setup is a little different.

Pulling up on the bridge tone control allows you to engage the neck pickup along with the bridge and middle pickups for two additional tones, while a reverse-wound, reverse-polarity middle pickup allows for hum cancellation in positions two and four.

One tone control adjusts the neck and middle pickup, while the second tweaks the bridge – it’s a common mod on old-school Strats, so we’re pleased to see it here. The same goes for the bridge’s Greasebucket tone circuit, which prevents the tone getting darker as you roll the volume off.

Yet despite all the hidden extras, the playability is quintessential Strat, albeit with a contemporary edge. Fender’s current go-to neck shape, the one-size-fits-all ‘modern C’, is unlikely to offend, and its barely-there satin finish lends it a sleek, modern playing feel.

Fingerboard-wise, it’s worth noting that the Penny and Satin Lake Placid Blue finishes are only available with maple ’boards, while you can get a proper rosewood job on the Honey Burst and Arctic White versions, as opposed to the pau ferro you’d find on Mexican-made models.

Of course, the Yosemite single coils are the proverbial pudding for your ears’ delectation – and, in short, they’re stunning. That trademark Strat compression, snap and sizzle is there in spades, and the pronounced attack cuts through any amount of dirt, while there’s a glassiness to the tone that capably straddles vintage and modern voices. In short, they’re some of the best Strat pickups we’ve ever heard, with a beautiful sense of compression that gives them the edge over cheaper models.

The neck is toasty, the middle light and airy, and the in-between positions do that Jimi thing so well – plus, you get a whole new kind of quack with the push/pull engaged and the neck mixed in, too. Like many of Fender’s latest Strats, the bridge pickup isn’t overly thin, with enough low-end to hold its own, but adding the neck pickup into the mix produces a fat, wide-range tone that’s hugely addictive.

Make no mistake, a blendable neck pickup is a hugely welcome addition to the Strat’s tonal arsenal. We would argue the age-old plastic tone knob doesn’t necessarily lend itself to quick and easy tugging, as it were, but the look will please traditionalists.

This upgraded Strat isn’t perfect, but any drawbacks are largely down to personal preference, and don’t take away from a hugely accomplished build. The bent steel saddles won’t be to everyone’s tastes – especially if you’re a keen palm-muter – and some players would prefer noiseless single coils to the more vintage-style Yosemites’ hum. A few more finishes wouldn’t go amiss, either.

Nonetheless, if you’re after a workhorse Strat with a bevy of additional tonal options, not to mention rock-solid, smooth-operating hardware, this is a strong Performer indeed.