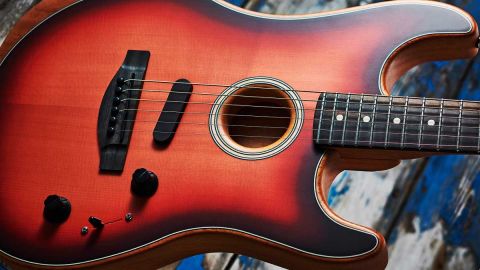 An innovative, lightweight electro-acoustic that proves Fender's Acoustasonic designs are no flash in the pan; they might well be the future.

There's no question that when Fender debuted the Acoustasonic Telecaster, a bold hybrid of a classic electric guitar design and next-gen acoustic design, draws dropped, minds were blown... People freaked out.

We were used to incremental changes, careful evolution. Occasionally, a guitar would come along that had many such advancements, and it seemed radical. But the Acoustasonic? That was the guitar world's hoverboard moment; a jolt to remind us we're living in the future today.

But a year on, and the Acoustasonic Strat is released, and the signs are that our expectations have evolved also. We know what to expect. Here we have one of original radical guitar designs – the Fender Stratocaster – inhabiting the form of another. Is this to be a winning formula?

First impressions would suggest so. Played acoustically, the Acoustasonic Strat has an impressive voice. It's of course not quite a full steel-string acoustic tone but the sound that issues forth from the newly designed donut soundhole (or the patented Stringed Instrument Resonance System to give it its Sunday name) has a nice three-dimensional quality.

Build-wise, the Strat follows where the Tele went before. It's a full-scale Fender, mahogany neck, mahogany on the back and sides, and it is strung with acoustic strings. This hybrid design continues with an acoustic-style bridge with compensated saddles.

As with the Tele, we've got a master volume control and a five-position lever Voice Selector, offering five pairs of voices (A and B) that you can use individually or blend via the Mod control. The power for these electronics comes via USB. Just charge it as you would your phone.

Weight-wise, the Acoustasonic is very accessible. This will be the first Strat we have shouldered to weight in at 2.32kg (5.1lb). Unplugged, it lacks a little in volume but has plenty of midrange character. It would sound great with a mic in front of it.

The neck feels incredible. It's a ‘deep C’ neck profile, the same as Fender’s Professional series, except with a marginally flatter fingerboard radius. While the feel requires a little more brawn (the Acoustasonic ships with a set of Fender Dura-Tonecoated phosphor bronze 0.011s), it is no barrier to soloing, and it feels very much like an electric guitar.

Sound-wise? That's a whole different ballgame, and it depends what you plug into. Via an AER combo, it's acoustic-o-rama. In positions 4 and 5 you've got classic dreadnought and fingerstyle acoustic tones. The so-called smaller body voicings don't sound exactly small.

In position 3, the top pickup is brought into action, bringing in a level of ambience that will please contemporary acoustic fingerpickers, disciples of Tommy Emmanuel et al. Rhythmic taps sound organic and musical. Position 2 will give you some nice hybrid tones but in the acoustic setting the Acoustasonic is exactly that.

• Taylor T5z Custom
More electric- feeling than the T5, the T5z is still a highly visionary design for the creative player wanting to merge electric and acoustic sounds.

Plug into an electric rig and the Acoustasonic is good to go for country, blues, rock, or spangly indie-rock. With a little fuzz or overdrive in front of it the Acoustasonic Strat really excels. There's a little more weight to the tone than a regular Strat, but with a little less sustain too. Slide players will love dialing in a little rangy, throaty break-up and going for it.

Indeed, it is pleasing to the Acoustasonic Strat sound so good in the upper registers as well as when fretting chords. This does both well. But then it wears both the acoustic and electric sides of its personality well. We might not have been as shocked by the Acoustasonic Strat but playing it still feels like you are experiencing a paradigm shift in guitar design, that you've got something new in your hands and that opens up a world of musical possibilities.

We love that bridge pickup through an electric rig. It sizzles with a little gain. We love the lightweight electro-acoustic experience, too, and the compact form of the Stratocaster. The acoustic tones are mighty convincing, too. Sure it would have been nice to have a compensated saddle for an plain third string. And what potential might a neck pickup have here?

These are things Fender can think about in the future. Ultimately, in the here and now, they've delivered a vision of the future, and if you are looking for a smart hybrid between the steel-string acoustic and an electric, you'll find it in this charming and innovative new take on an electric guitar classic.

MusicRadar verdict: An innovative, lightweight electro-acoustic that proves Fender's Acoustasonic designs are no flash in the pan; they might well be the future.

The electronics are the same as the Acoustasonic Telecaster's. There are knobs for master volume and Mod control, which blends the voices selected via the five-way blade-style Voice selector switch.

The Strat headstock should be reassuringly familiar. Note the lovely etched Fender logo.

The neck join is a typical Fender build with four screws and a heelplate. Here we have Micro-Tilt adjustment to finetune neck pitch, which is a good thing to have when you've got an acoustic-style bridge.

This Tele-style output jack plate also houses the socket for the  Lithium-ion battery. One charge should last for 20 hours of playing time.

"Over the past couple of decades, the guitar market has become haunted with the ghosts of well-meaning attempts to merge the acoustic and electric worlds. Few have had as much potential to endure as this."
Guitar.com