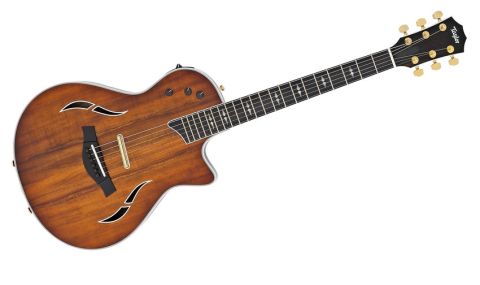 More electric- feeling than the T5, the T5z is still a highly visionary design for the creative player wanting to merge electric and acoustic sounds.

Released in 2005, the original T5 - Taylor's first 'electric' guitar, a grand auditorium-sized hollow thinline - was extremely successful. New for 2014, the T5z offers the same functionality, but with a downsized body and a more electric-like feel and setup.

Most obviously, the T5z's body size is reduced from the spacious grand auditorium outline of the original to a more conventional 'electric' size of 356mm (14 inches) wide by 460mm (18.1 inches) long: it's broader than a Les Paul but trimmer than an ES-335. It's not a million miles from Taylor's SolidBody SB1-S outline, with its rounded Venetian cutaway, while the bridge sits lower and is more centrally placed, on the smaller body.

The fingerboard radius of the T5z has been brought inline with the Gibson standard 12 inches instead of the original's flatter 15 inches. The bigger Taylor 'electric' fret wire - 2.74mm wide by 1.3mm high - combines to produce the most electric-like playability we've encountered from Taylor. These might seem small changes, but they have a big effect.

Compared to our original T5, the T5z is a very different-feeling guitar. Sound-wise, too, even unplugged, things are different. That shouldn't be a surprise, as our bigger original has a solid-spruce top; the T5z Custom has a hardwood koa top and the T5z Classic, which we also tested, has a flamed maple top.

"Hardwood tops change the game," Taylor's Andy Powers tells us. "Don't forget, it's completely hollow - it's a thin acoustic guitar. A spruce top is going to have more of an acoustic response to it, because you've got the dynamic range and the quickness-of-motion of the spruce. If we use koa, maple or mahogany, you'll hear a more compressed, subdued initial attack and a little longer sustain - more of a semi-hollowbody kind of response."

Strapped on, the lightweight T5z is slightly neck-heavy: the original is more balanced. The smaller body restricts unplugged projection, though it's still more resonant, lively and louder than an unplugged ES-335. Our koa-topped Custom has just a little more clarity on the higher strings, compared to the slightly rounder-nosed high-string response of the maple-topped Pro.

While we've used the T5 with both electric and acoustic amps, employing a splitter to direct the signal, the T5z seems happiest into a Fender-style clean amp. Position 2 (neck humbucker) has a lovely, woody jazz voice; position 3 (bridge humbucker) has bite and depth, and hints at a Telecaster - especially with a little amp crunch. Position 4 (neck and bridge in parallel) continues the Fender-y vibe, a more mixed-pickup Tele perhaps, while position 1 (neck and bridge in series) is a little darker, more Gretsch-y.

Position 1 combines the soundboard transducer with the neck humbucker and offers the maximum 'acoustic' tonality which, through our AER and Line 6 StageSource, is certainly 'modern electro', although we have electric strings, obviously, and that neck humbucker. So, even with EQ adjustment via the ES-style controls, there's still an almost hollowbody archtop element to the voice.

It is a hollowbody, of course, so the amount of volume you can achieve before feedback is less than either an ES-335 or a solidbody. That said, the T5z is more resistant to feedback than the original.

The T5, or indeed the T5z, doesn't aim to emulate a classic. And although the T5z feels and sounds more electric, the woodier tonality and shorter sustain still shouts acoustic.

It really is a hybrid. Via the highly efficient EQ, it produces older hollowbody tones, or with a treble lift, more electric, modern Americana sounds. It's a great ensemble guitar, and is ideal for tracking parts and finding space in a recording. It's a serious investment, of course - although the T5z Classic costs just £1,511 - but addictive and unique. Try one.