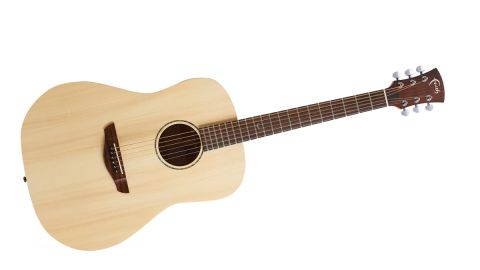 A decent solution to the problem of an affordable, but Eggle-designed, guitar.

The renowned luthier Patrick James Eggle is known for making wondrous guitars under his own name at accountant-terrifying prices.

His electric models regularly exceed £3,000, while you’ll also pay the thick end of that sum for one of his higher-spec acoustics. However, if your wallet doesn’t stretch quite that far but you’ve always hankered after an Eggle-designed instrument, look no further than Faith Guitars.

Although some of its instruments will set you back four figures, its Indonesia-built Naked range, aimed at the low- to mid-budgeted player, promise to deliver high performance at a fraction of his PJE-branded guitars.

This month, we’ve got a Naked Saturn, retailing at a manageable £479, for review. Let’s have a play (clothing optional).

Straight out of the box - a hard case will cost you extra, presumably because Faith is trying to keep costs to a minimum - the Saturn looks and feels terrific. The simple two-stage satin finish is key to both elements, neither covering the Engelmann spruce top and mahogany sides with too impenetrable a lacquer or diminishing the slinky feel of the neck.

Details are clearly high on Faith’s agenda, with the overall design - a familiar but manageable dreadnought body - functioning as it should from the off. A front strap button is located on the underside of the neck join, meaning (in theory) that your guitar should stay attached at that end, a highly player-friendly consideration that reveals the luthiers’ understanding of guitarists’ needs.

The machine heads, Faith’s own, look affordable but function smoothly and solidly enough. Although the bridge isn’t remarkable, it’s reassuringly familiar, and its ebony pins add an aesthetic touch.

Playability and tone range, achieved without too much of an outlay, have clearly been high on the list of objectives for the designers. On Faith’s website, Eggle breaks down the frequency curve that he’s aiming for with these models - a scooped ‘smile’ - and while this might imply that mids aren’t the strongest tonal focus here, there are plenty available.

Truly glassy highs aren’t really this guitar’s province, it has to be said, but get yourself some new strings, dig in with a pick close to the bridge and you should achieve a perfectly workable amount of top end. The same goes for bass: again, a guitar at this price point and composed of these materials won’t be making your audience’s stomachs quiver, but the low end which is there is perfectly adequate.

So where does the Saturn excel? Its neck dimensions are very player-friendly indeed, with an action that isn’t so low as to be invisible but which permits easy position changes during fingerpicking and flat-picking.

On top of this, the individual string voices are clear and the body pushes out a reasonable amount of volume, coupled with real clarity. Barre chords are made easy and fun, while those of the folkie and/or indie persuasion will be rewarded with minor sixths and suspended chords that ring out with impressive resonance. Harmonics also spring out clearly and usably.

To use the Saturn fully - and make no mistake, this versatile guitar has plenty of applications - get your Bert Jansch head on and try an alternate tuning such as DADGAD, which sounds divine thanks to the surprisingly big tones of your lowest D.

Similarly, tuning everything down a step works beautifully, as the dreadnought body dimensions are big enough to handle the extra low end. In fact, in this range is where the Saturn seems happiest.

Stage performers will, no doubt, be looking for a balanced instrument that sits well against the body and the Saturn is perfectly fine in this area, in part thanks to the cunning placement of the front strap button that we mentioned earlier.

The body depth varies from 105mm to 120mm, in other words it isn’t the deepest guitar ever made and should be readily strummable on a strap when you’re singing your latest ditty on stage.

Beneath the bonnet, you’re treated to a bracing system called the Patrick James Eggle X-Brace Design, which sounds impressive even if, like most of us, you have no idea what it actually is.

Essentially, as Eggle has explained, this cunning assembly of woods is placed within the body in such a way as to maximise volume and tone while strengthening the body to modern requirements. Again, a system such as this, aligned with a pricetag as reasonable as £479, is quite the eye-opener in today’s saturated acoustic guitar market.

Budding Jon Gomms and Andy McKees will be pleased with the durability of the Saturn, which will (all right, should) take most of the abuse handed to it by slap-handed body percussionists with aplomb. The finish of the body is, as we mentioned above, not designed to be especially durable, so don’t expect to wait long before it gets distressed if you do elect to get physical with it.

This brings us neatly to the subject of electronics, absent here but available on the Saturn’s electro-acoustic sibling for only £50 more. Perhaps there’s a psychological barrier at £500 which we’re not acknowledging sufficiently, but it seems to us that the inclusion of a pickup for a mere extra half ton is a no-brainer for any musician, whether you’re a stage or bedroom performer.

Without on-board electronics of any kind, your only option if you want to amplify your playing or introduce effects pedals and software - loopers particularly come to mind - is an external or clipped-on mic, never a perfect solution outside the studio.

Despite this observation, Eggle and Faith are to be congratulated on bringing a guitar of this spec to market for this price. We’ve consistently noted above that it’s uncommon to pay £429 for an instrument, even in today’s cheap-guitar era, and expect to end up with something of this quality.

A quick visit to comparable luthiers (no names, no pack drill) reveals that Saturn-specced guitars are rare for this relatively meagre outlay. What are the alternatives within the Faith range? Well, we liked the look of the Venus models, especially a single-cutaway electro-acoustic model which they’re selling for only £509 - this seems to be a far more roadworthy instrument than the Saturn, and you only need to shell out another £30 for it.

The conclusion? There are no real surprises waiting for you with this instrument, whether you prefer to focus on the quality of the components or the usefulness of the design.

However, it’s a winner when it comes to picking it up and making actual sounds: you’ll definitely struggle to find a guitar at this price that plays so well, offers so much versatility and still has the stamp of one of the world’s best-regarded luthiers on it.

As for the Saturn’s Indonesian provenance, it might be a controversial view to purists, but at this price point you’ll never know the difference between this and a UK-made instrument. We are impressed.