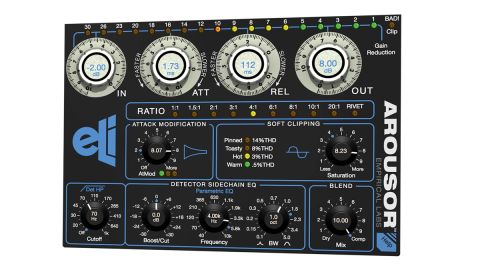 Arousor costs a pretty penny, but is the kind of compressor you’ll instantly fall in love with and quickly come to rely on.

Quite possibly one of the most eagerly awaited plugins ever developed, Arousor is Empirical Labs’ component-modelled virtual reimagining of the Distressor, the legendary mid-90s compressor, which is still very much available for around £1300.

Designed to be very close to the Distressor, rather than a perfect clone of it, Arousor (VST/AU/AAX) adds in a variety of features not available in the original hardware.

The four iconic oversized white knobs - Input, Attack, Release and Output - have been recreated, though, enhanced with central value displays into which precise settings can be entered numerically. Below those, the Ratio button strip sees the addition of 1.5:1 and 8:1 to the Distressor’s 1:1, 2:1, 3:1, 4:1, 6:1, 10:1, 20:1 and Nuke options.

The last of these (renamed Rivet here, for some reason) applies brickwall limiting, while the 1:1 ratio effectively facilitates bypassing of the compression circuit so that Arousor’s Saturation section can be brought to bear on its own - see boxout.

Our favourite of Arousor’s ‘extras’ is the Attack Modification knob, dialling non-linearity into the start of the attack curve for envelope lengthening and additional analogue mojo. The limiting effect that this reshaping has on the gain reduction is shown by the three-stage meter below the knob.

Arousor’s detection circuit is blessed with a simple high-pass filter (12-1000Hz) and a single parametric EQ band with sweepable bandwidth (0.1-5 octaves), a frequency range of 40Hz to 10kHz, and up to 30dB of boost or cut on tap. Using these, the low end can be taken out of the equation to reduce pumping and loss of focus, and precisely targeted frequency-conscious compression (for de-essing, etc) is brought to the table.

Arousor’s Soft Clipping section houses a single control, used to crank up a saturation stage that generates both even and odd harmonics, the latter coming forward as the amount of saturation applied increases. Empirical Labs claims to have gone to great lengths in making this circuit behave in as analogue a way as possible, and that’s certainly borne out by the results - everything from smooth transient rounding and transparent clipping to brutal-but-beautiful crushing is on the cards. Interestingly, a four-lamp metering system for visualising this saturation has been built in, too, monitoring the amount of total harmonic distortion (THD) working its way into the signal, from 0.5% (“Warm”) to 14% (“Pinned”). Arousor’s soft clipper is a brilliant inclusion, although we hope a bypass button is included on that future feature roadmap, for ‘before and after’ comparison.

Finally, Arousor further embellishes the Distressor template with a Mix knob, enabling parallel compression. Arousor sounds and feels remarkable similar to the Distressor - certainly close enough to work the same magic in the mix. That addictive combination of smoothness and aggression is in full effect, and each ratio has its own character and personality.

Like the real thing, it’s particularly effective on drums and bass, but it also delivers the goods on vocals and other sources. It sounds, in a word, superb. For a native compressor plugin, Distressor is eye-wateringly expensive, but Empirical Labs says that many more features and enhancements are in the pipeline, and buying Arousor now gets you free updates until 2020.

Obviously, what that means in real terms is unknown at this point, so the value proposition has a question mark over it, but that aside, Arousor successfully puts the sonic essence of one of the greatest dynamics processors of all time ‘in the box’ in confident, convincing style.